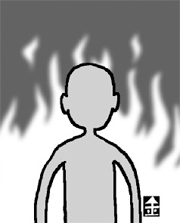 There are reasons why Buddhist monks have their heads shaved in temples. Hair is considered a symbol of agony and ambition. By keeping their hair, monks could become mired in worldly sufferings and not fully absorb Buddha’s teachings. Hair is therefore called mumyeongcho, meaning “grass that hides the light.”

Mumyeong, or avidya, is at the root of agony. It refers to “deep-rooted ignorance” that doesn’t allow a person to see things as they are. It is foremost among the 12 causes that bring about pain and suffering in life. It is Buddha’s eager teaching that avidya must be done away with in order to reach awakening.

The surge of an unidentified fire in the heart without any reason is called mumyeonghwa. Pei Xiu, a prime minister of the Tang Dynasty, once visited a Buddhist temple. He saw “mumyeonghwa” written on a wall and asked what it meant. The famous Zen master Huang Po reproached him, “Don’t you even know that?”

Pei Xiu, bragging of his status, challenged the monk, “I am a prime minister of the Tang Dynasty, so how am I supposed to know India’s sacred books?” The Zen master replied, “Avidya’s fire started here,” referring to Pei Xiu’s vanity and anger, and a heart that was void of a sincere desire to learn.

The wise prime minister immediately understood and showed humility. Then, the Zen master praised him, “Avidya’s fire was then extinguished.”

This is known in Buddhism as a “direct pointing to the mind.”

Avidya is the wall that hides our view. If it is deep and thick, then our heart suffers and it develops into an illness of the spirit. Then, the fire that emerges consumes one and can further burn society.

It was at the beginning of the year that an old man who harbored avidya’s fire burned down our No. 1 National Treasure, Sungnyemun.

On Tuesday, a young man set fire to a dormitory for those studying to become civil servants and then stabbed those who tried to escape the flames with a knife.

It is a prime example that shows our society’s insanity.

The effort to get rid of avidya and control our hearts is a long-held theme of Asia’s spiritual civilization and a common goal of personal development.

However, the level of avidya that Korean society has shown is surpassing the level of our personal development. We are being engulfed by conflagrations that are raging without reason.

We should now seriously try to find the reason for the high level of social pathology.