Dogged efforts made to register canines

Dogged efforts made to register canines 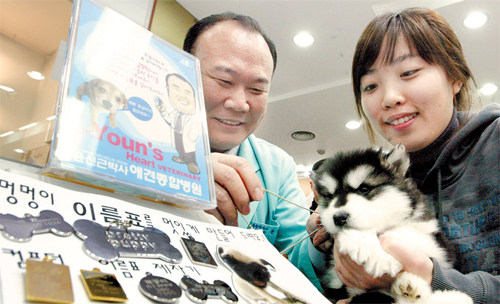 A dog owner picks out a tag for her dog at a pet shop in Chungmuro, central Seoul.


Tony, a three-month-old Shih Tzu, nervously waits for his shot. Perhaps he senses that this is not a run-of-the-mill vaccination.

The syringe looks larger than usual and instead of a liquid inside the tube, there’s a tiny glass-coated microchip.

After some encouraging words from the vet and his owner, Tony stops struggling to escape and relaxes, giving the vet time to jab the needle into the back of Tony’s neck.

Moments later, the vet holds up a scanner and a 15-digit number appears on the reader. 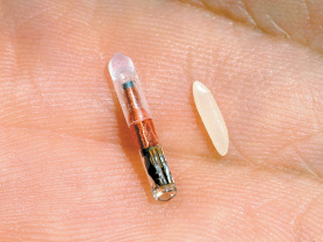 Vets implant the identity microchip, about the size of a large grain of rice, into the back of the dog’s neck. Using a scanner, it is possible to read information about the dog and the owner that has been registered with local governments. [JoongAng Ilbo]

“More than 900 dogs in Seongnam have been chipped since last Monday,” said Kim Yong-wu, a veterinarian at Gana Animal Hospital in Seongnam, Gyeonggi. “We’re hoping that these chips will help reduce the number of abandoned or lost dogs.”

On Oct. 13, the Seongnam city government began a trial run of an animal registration system. Dogs get chipped and registered, a process that falls in line with the animal protection law that was revised in January.

The information is stored in a government database (www.animal.go.kr) run by the Ministry for Food, Agriculture, Forestry and Fisheries.

The revision requires local governments to get dog owners to microchip, tag or give a regular name tag to their pets, and then register the animal.

According to government figures, 77,000 dogs were abandoned last year and kept in shelters, which cost 7.4 billion won ($5.2 million).

But experts say, considering the figure only accounts for abandoned dogs complied by the government, the actual figure could be far higher. 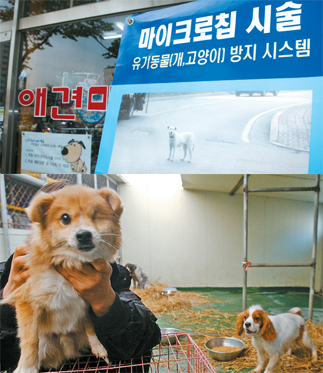 Top: The city of Seongnam has launched a trial run for canine implants. Twenty-seven animal hospitals in the area are chipping the dogs for free until November. Above: The Korea Animal Rescue and Management Association rescues an abandoned, one-eyed dog. The number of abandoned dogs has tripled in the past five years.[JoongAng Ilbo]

“Until the end of November, we plan to chip about 8,000 pet dogs over three months old in Sujeong and Jungwon Districts, and then chip the dogs in Bundang District, before officially kicking off the system in October next year,” said Kang Won-gu from the Seongnam city government. Seongnam consists of these three districts.

Kang said the number of dogs, as well as the number of abandoned dogs, in Sujeong and Jungwon is higher than in Seongnam, which is why they launched the system in these two districts first.

There is no fee for the implants during the trial run in Seongnam. The procedure would normally cost about 19,000 won.
When the system is launched next year, dog owners will have a choice between chip implants and electronic tags, the local government said.

Some owners might not warm to the idea of inserting a foreign substance like a microchip into their furry friends. A tag is usually attached externally to the dog’s collar.

Officials at the Seoul city governments said it will offer the same choice between the chip or electronic tag from the beginning of 2010. 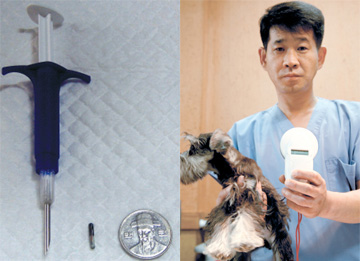 Left: The syringe and a microchip used for canine chip implants (sized to scale against a 100-won coin). Right: Kim Yong-wu, a veterinarian at Gana Animal Hospital in Seongnam, Gyeonggi, shows how a scanner reads the code from a chipped dog.

Incheon and Busan will do so starting next September.

“I would go for an electronic tag because I think the injection would be painful for my dogs,” said Kang Hyung-soo, a Seoul resident who owns two Pomeranians, one seven years old and the other 17 years old. “If I’m asked to put a microchip in my body or get an electronic tag, I would choose a tag. The same goes for my dogs.”

“I’m not sure if the benefits outweigh the risks, and I guess I believe the chances of losing my dog are low.”

So does chipping your dog pose any health risks to a dog?

Studies conducted between 1996 and 2006 in the United States and Europe show that some lab mice and rats developed tumors after they were chipped. But experts say it didn’t necessarily follow that dogs, or cats, would suffer the same fate after the chip was implanted in their bodies.

“Most lab mice and rats weigh about 20 grams [0.7 ounces] and the microchip weighs about one gram. That means the chip is one-twentieth of their weight. It would be like a man weighing 70 kilograms having a 3.5 kilogram dumbbell put in his body,” said Jeong Wu-seong, a veterinarian at the Seoul National University Hospital for Animals.

“You just cannot compare the findings in mice and rats to dogs.”

Jeong has chipped about 1,300 dogs in Korea. He says he hasn’t received any complaints about side effects nor any requests for removal.

In addition, experts point out that microchip implants have been around for 15 years with no major reports of fatal side effects.

“The microchip implants have long been registered as a medical device. This means the safety aspect has been well looked into,” said Park Sung-oh of the Korean Veterinary Medical Association. “The cases of tumor inducement are extremely rare, and as long as the procedure is carried out by a veterinarian or vet technician, side effects can be prevented.”

According to a poll conducted earlier this year by an online community of people who wish to protect abandoned dogs, 52 percent of respondents supported the move to get dogs registered using chips. This compares to 48 percent who thought otherwise. A total of 370 members participated in the poll.

“When we consider the number of abandoned dogs and the condition they are usually in when found, and when we think about the owners who have lost their dogs and their indescribable pain, I think we need to chip our dogs,” wrote a voter with the online ID “princess.”

“As long as we can increase the chances of reuniting lost pets with their owners, I’m for it,” wrote another with the ID “onike.”

According to the Korean Veterinary Medical Association, 5,810 dogs in Korea had been chipped as of October this year, compared to 3,630 for the entire 2007.

The figure only accounts for the dogs that received the implant from a member of the association.

Before the revisions to the animal protection law, the main reason owners had their dogs chipped was because of travel. Countries like European Union nations, Japan, Australia, New Zealand and South Africa require dogs coming into their countries to have chip implants for quarantine control.

Whether the registration system, using either chips or tags, will actually help reduce the number of abandoned or lost pets is open to debate.

For starters, there is no point in chipping a dog unless scanner equipment is available to read the information, and people who find lost chipped dogs might not know what to do.

“We are going to place scanners in local government offices, animal hospitals, animal protection facilities and the organization in charge of inputting the data into the system,” said Lee Yeong-cheol from the animal health division of the Ministry for Food, Agriculture, Forestry and Fisheries.

In Seongnam, animal hospitals are doing that job for now. The local government has yet to appoint the organization for the task.

There would also be problems for the system if an electronic tag is removed.

The tag is, after all, just a chip attached to the dog’s collar and it could be damaged or taken off.

Another assumption would be that the dog owner’s contact information is correct. People can easily change their phone numbers and not get round to updating their personal records on the government system.

Experts and activists are also concerned about some potential loopholes.

“According to the new regulation, only ‘dogs kept at homes for companion purposes’ are subject to the identification system. This eliminates a lot of dogs,” said Han Jeong-ah, the president of the Korean Alliance for Prevention of Cruelty to Animals.

“For instance, strictly speaking, dogs we have here and at other shelters do not have to be registered. And they say they will fine those who don’t register their dogs. Well, people could easily avoid saying that their dogs are not for ‘companion dogs,’ but are just [in their homes] temporarily.”

Taking these points on board, the agriculture ministry said it plans to expand the system in the future.

“People are not yet comfortable or familiar with this whole registration system,” Lee said. “We plan to see how the system goes first and expand it in the coming years.”

Veterinary associations, meanwhile, argue that the system shouldn’t only be about abandoned or lost pets, but also about disease, infection and quarantine control.

The current information sheet that dog owners have to fill out and input in the system does not ask for the pet’s medical history.

“For the animal identification system to have a significant impact, it should be used for disease and quarantine control in general, and not just for reducing abandoned and lost dogs, only. Such a database can be extremely useful,” said Gwak Jung-gwon, the president of the Seoul Veterinary Medical Association, the Seoul chapter of KVMA.

The agriculture ministry said it will eventually require the dog’s medical history to be included, but for now, it’s more focused on gathering information on the country’s canine demographics, and hopefully, strengthening a sense of responsibility among dog owners.

Meanwhile, dogs like Tony are going to have to brace themselves for a shot in the neck if chipping becomes more popular.