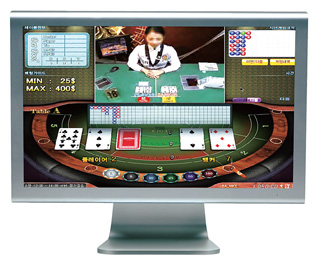 A real-life croupier at a card game on an illegal online gambling site.

Koreans are not allowed to enter casinos except for Gangwon Land in Gangwon Province, a measure meant to suppress the number of gamblers here, since Koreans have traditionally viewed gambling with a skeptical eye.

But as one of the world’s most wired countries, such a ban seems futile. Internet gambling has gathered a huge local following, and the powers-that-be are worried.

The story of Lee, 38, an office worker at a medium-sized construction company, typifies what happens when gambling spirals out of control.

Last year, he was spending more than 2 million won ($1,404) a month out of his 3.5 million won monthly salary on online gambling activities.

In June last year, he lost 6 million won on a horse racing game and he was also playing cards, not with much success.

Lee, who didn’t want to disclose his full name, saw his debts mount and he was forced to close a savings account containing 30 million won.

He then applied for and got a bank loan, which didn’t stretch very far, and he ended up calling a loan shark, racking up a 50 million won debt in total.

All told, he frittered away 120 million won.

“Even when I’m at work, I can’t stop thinking about gambling,” said Lee. According to his co-workers, Lee would spend the entire weekend in front of a computer.

That was then. Lee has since quit his job and nobody knows where he is.

Behind the excitement and the adrenaline rush of illegal gambling online are similar tales of misery. 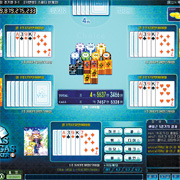 A legal gambling site where cyber cash is used instead of real money for placing bets.

In August this year, the government shut down a gambling site where the total amount bet has topped 2 trillion won, and last month the police uncovered a site specializing in card games where revenue had reached 500 billion won.

According to police reports submitted to Grand National Party lawmaker Jeong Gab-yun, the police discovered 5,800 illegal online gambling sites in 2006 alone. Last year, that number dropped to 2,714 but is on the rise again this year, with 2,406 cases as of August.

“These gambling sites do not require adult certification, which is why more young people are using them,” said Jeong. “Rough estimations are that there are about 1.5 million daily users.”

Experts say the biggest problem is that it’s hard to gauge the real scope of illegal gambling through the Internet because cyberspace is so vast. According to the Korea Information Society Development Institute, there are about 1,600 domestic gambling sites, of which only 140 have been investigated so far. 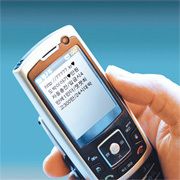 But even these numbers are based on an educated guess. Civic groups argue that the real number could be much higher.

“We think there are at least 2,500 sites operating of which more than 95 percent have servers abroad,” said Kim Su-yeol, an official with the civic group Anti Internet Gambling Association, adding that other countries have less stringent gambling laws.

The rising number of Internet gamblers has been noted by professional consultants. “A few years ago, we would not have that many people seeking help because of Internet gambling, but there has been a surge recently,” said Shin Haeng-ho, an official with the Korea Prevention and Cure Center for Gambling Problems. “These people often gamble on- and offline.”

In general there are two types of Internet gambling. One is where traditional games easily found at casinos such as poker are translated into an online version. Then you have illegal sites that accept bets for live sports such as horse racing.

Another type of site encourages users to use cyber money to plays rounds of cards. The cash can only be used at that particular site. 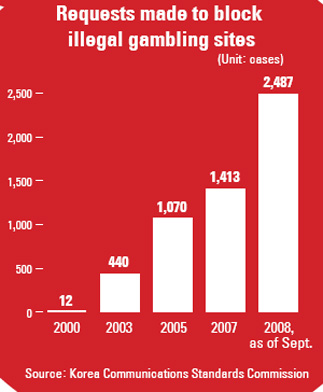 Currently, there are thought to be 60 companies offering such services, and they are legal. A site like Hangame receives an average of 3 million visitors a day, half of whom play Western card games.

Problems arise when the cyber money is traded for real money, with brokers acting as middlemen for the transactions between cyber money and real cash, which is illegal.

The brokers lurk in virtual waiting rooms on the sites waiting for a gamer to pass by who is loaded with cyber cash. They offer cash and then sell the cyber money, usually at a 10 percent profit, to other site users who want to continue playing but have run out of resources.

Earlier this month, 10 billion won worth of cyber money was sold for 150,000 won in real cash on the cyber black market, according to an industry insider.

Choi, 45, an operator of an illegal gambling site who didn’t want his full name to be used, said most servers are located in the Philippines or Thailand to get around Korean gambling laws.

“Many [sites] have been moved to China, Taiwan, Japan and Canada recently,” Choi said. “I heard the sea cables were disconnected when there was an earthquake in September last year near Taiwanese waters and there were some problems with the servers.”

How do these illegal online gambling sites make money? By charging a fixed dealer fee for each bet placed, Choi explained. Typically, 12.7 percent is charged, meaning that a dealer makes 127,000 won for every 1 million won bet. The commission is then divided among the number of operators of the site or by whatever agreement is in place.

The most important job for keeping the whole operation working fluidly is promotion, which is carried out primarily through text messages or using message boards at portal sites.

“We use at least three cell phones each. One is for sending out text messages, the other for talking to clients and one for direct contact with the headquarters,” said Choi. “These phones are all unmarked so even if the police trace them, they won’t be able to find anyone.”

After the game is over, the user can cash in his cyber money for real money through the waiting broker.

The problem for the user is that he can’t be sure if the game is rigged against him.

Choi says it is possible to fix games using hacking tools and special programs that enable two employees at the gambling site to cheat by seeing each other’s cards and betting accordingly. There’s a program called Viewer that enables users to see an accomplices’ and a user’s hand, and it costs up to 30 million won.

Due to the sheer number of illegal gambling sites, a site that commands about 300 daily users is considered a major operator.

In such cases, the daily profit is said to be between 200 million won to 300 million won. The increased competition is forcing operators to take security measures to protect their sites against hackers.

“The majority of the sites do not spend money on Internet security, which is why hackers keep up their attacks,” said Choi, adding that site operators are more concerned about hackers than a police probe.

Government officials say it will be tough trying to shut down these illegal sites because their servers are typically kept abroad where gambling might be legal.

“Even if you get the guys at the upper level of the operation, you’re not going to get the guys at the lower end because they are spread out here and abroad, which makes it very hard to stop what’s going on,” said No Sae-ho, an official at the cyber crime unit at Chung-cheong Police Headquarters.

“Not only that, the phones they use are stolen and bank accounts are opened under false names. It takes up to two months just to investigate one site.”