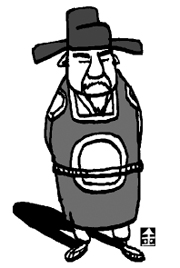 Many know the song “The History of Spinning a Watermill” that starts, “I don’t want a government post nor honor/ would rather live on a hill in a grass-roofed house.” It is a popular song about trying to rid oneself of the grubbiness of worldly life.

Shin Jeong-ha, a Joseon Dynasty civil minister under King Sukjong, left a similar poem as he returned home, having been dismissed from office after becoming entangled in political strife.

“Even if a government post is precious, can it compare to my body/ As I speed back home on a limping donkey/ I quickly wash worldly desires in the rain.” It has drawn the light and free spirit felt after his clothes are washed free of dirt in the sudden rain, as he returned home on a shabby donkey.

Government posts are full of worldly desire and ambition. They are posts where one can get both wealth and glory, so who would not like one? But the way to a government post is full of rough seas. Depending on the degree of politicking, one must get used to blurring the lines of right and wrong, and living by such rules, one ends up losing one’s dignity.

A heavenly mandated government post reflects a person’s high and noble character, encompassing the four virtues of kindheartedness, determination, harmony and wisdom. Mencius deplored “people these days [who] polish their character to get a government post ... and then, having earned the post, they throw away their noble character.”

We are reminded of this when government officials in South Korea displayed their own vulgarity in making verbal attacks at the National Assembly. A legislator asking the Minister of Culture and Tourism, whether he is “the president’s servant,” or the minister who can’t control his anger and curses journalists, are the same. South Korean politicians nowadays who blemish our politics by their own lack of refinement are not free from Mencius’ criticism.

To all those legislators of vulgar speech and absent nobility, enslaved to politicking during the National Assembly inspection - and the civil servants who responded without a shred of dignity - we would like to recommend that they read an enlightening book that would enrich their knowledge.