Fact and fiction meld in life of mysterious Joseon painter

Fact and fiction meld in life of mysterious Joseon painter

The dark clouds spreading over the sky foretold heavy rain last Thursday, but the gloomy weather didn’t deter visitors from inspecting a series of elegant paintings and calligraphy dating from the Joseon period.

Taking into consideration that the museum opens twice a year every spring and fall and that it owns many cultural treasures that were once lost or taken away during the colonial period, there seemed to be more people lining up than usual.

Every day for the past two weeks a line of visitors stretched 300 meters (984 feet) in front of the museum, and officials reckon 200,000 people have seen the exhibition since it opened on Oct. 12, buying up more than 2,000 prints of the art on display.

From top to bottom: “Scenery on Dano Day,” “A Boating Scene” and “Await,” all by Shin. [JoongAng Ilbo]

“Such crowded scenes are unprecedented,” said Tak Hyun-kyoo, a researcher at the Center for the Study of Korean Arts. The center was set up by the museum in 1966, four years after Jeon died.

Part of the attraction has been the work of one very special Korean painter, an artist who has captured the imagination of the country in the past few weeks.

Just as art lovers jam the Louvre Museum in Paris to see Leonardo da Vinci’s Mona Lisa, the star attraction at Kansong is the work of Shin Yun-bok.

Only 100 of Shin’s paintings are known to exist today, some of which are housed in the Kansong Art Museum and the National Museum of Korea. Much of his work was burnt or damaged when Japan annexed Korea during the early part of the 20th century.

The recent exhibition displayed several rare pieces, including “Portrait of a Beauty,” “Lovers Under the Moon” and “Scenery on Dano Day.” 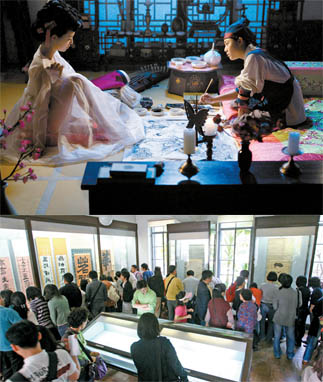 Top: A scene from the SBS TV drama “Painter of the Wind.”above: The crowded exhibition hall at Kansong Art Museum. The painting on the right is “Portrait of a Beauty.”

But why the focus on Shin as opposed to the work of weighty Joseon painters like Kim Hong-do, who drew portraits of King Jeongjo, or royal court painter Kim Deuk-sin?

“Despite Shin’s reputation as a representative Joseon painter, we don’t know much about him,” Tak said. “People are drawn to the unknown.”

All that is known about the painter is that he was born in 1758, the son of Shin Han-pyung, a member of Dohwaseo, a government-based royal painting institute, and that his pen name was Hye-won. We don’t know if he married, where he studied or when he died.

Lee Won-bok, director of the Jeonju National Museum in South Jeolla and an expert on Shin, says his career peaked from 1805 to 1813.

All we have are his paintings as a means to know the man and his life.

Although Shin was raised in a family involved in the art world, he wasn’t regulated by rules and conventions, and he tended to follow his own path.

“Since Shin’s father worked at the Dohwaseo for more than 40 years until he was 75, Shin wasn’t allowed to be part of the public institute,” Lee said. 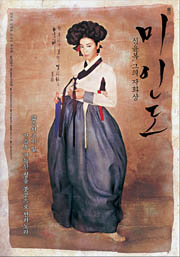 A film poster for “A Portrait of a Beauty,” which will open Nov. 13. Shin appears as a female painter. [JoongAng Ilbo]

At that time, there was a law that restricted fathers and sons from sharing a workplace. This was a blessing for Shin, Lee says, since it allowed him to draw more creatively and freely without any social restrictions. Born to a middle-class family, he mingled with the upper classes and painted a romanticized version of their lives.

Portrait of a Beauty, for example, depicts a woman, perhaps a gisaeng, a singer-cum-dancer who entertained the nobility.

The painting is very detailed with vivid patterns and colors. Her hair is neatly tied using castor oil, which was a common custom.

She is also sensuousously charming - Her eyes have a longing look and her lips are like cherries. It’s as if Shin had known her touching feelings from the bottom of her heart.

The detailed figures of elegant women in most of Shin’s paintings were enough to enthrall Lee Jeong-myung, the author of the novel “Painter of the Wind,” published last year in August. The book, which has sold some 400,000 copies until now, inspired the popular SBS TV drama of the same name that is currently running.

The first painting that the author can remember seeing was Scenery on Dano Day, printed on the back of a pack of Arirang brand cigarettes.

“The painting was very feminine and the figures of the women were very delicate,” he said. With no hesitation, he concluded the painter was a woman. When he found out Shin was a man, Lee was surprised and became more intrigued, drawn to the life of the painter and the people he painted.

This fascination gave birth in later years to his best-selling novel.

Shin appears as a lady who disguises herself as a man to solve the mystery behind her father’s suspicious death. In the story, she develops a relationship with Kim Hong-do, who appears as her mentor.

The fictional drama, which airs Wednesdays and Thursdays at 9:55 p.m., starring Moon Geun-young as Shin, also depicts Shin as a woman.

“The novel, which the TV drama is based on, is full of imagination based on historic facts,” said Baek Ik-hyun, one of the drama’s producers.

“The production team expected a hit before the show was aired because the novel prompted a lot of curiosity along the lines of ‘what if Shin were a female painter.’”

“Since there aren’t many facts about the actual painter, the film uses a lot of artistic license to tell the story,” said Lim Jung-hye from the film’s marketing department.

Lim says that audiences today are interested more in the fictitious story about Shin than about Shin himself.

But there are voices of concern from the art world saying that the fictitious twist in the tale is too strong - presenting Shin as a woman - and that the drama and film have distorted historical facts.

Ahn Hwi-joon, head of the government’s Cultural Properties Committee and a former professor of arts at Seoul National University, said he was irritated when the novel and drama turned Shin into a woman.

“It is concrete fact that Shin is a man,” Ahn said, adding that pop culture has become too sensational. “Shin is an important painter who reflects the history and culture of the late Joseon society. That’s why we have to respect him the way he is.”

In fact, the Kansong Art Museum has been getting many calls asking whether Shin was indeed a female or a male painter. “I was dumbfounded when I heard about the calls,” Ahn said. “Why raise issues on topics that are irrefutable?”