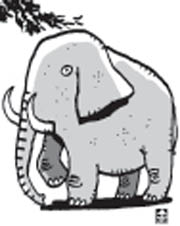 Ivory from the tusks of elephants was used for a variety of purposes, such as sculpture, accessories, billiard balls and piano keys before plastic became a substitute. But the growing demand for luxury goods has given rise to a recent boom in poaching of elephants in Africa.

At the height of the killing, a popular legend about elephant graveyards in Africa was often heard. Legend had it that old elephants would walk to a common site when they were ready to die. It was totally fictitious; poachers had created a clever excuse for their annihilation of elephants, claiming they had collected ivory from the graveyards.

The ongoing poaching had decimated the number of African elephants by almost half, from 1.3 million in 1980 to 625,000 in 1989. In response the international community instituted a global ban in 1989 on the sale of all ivory products according to the Convention on International Trade in Endangered Species of Wild Fauna and Flora which came into force in 1975. African countries intensified a crackdown on illegal poaching by burning confiscated African elephant ivory.

African countries have stored ivory from slaughtered elephants, calling for the Convention secretariat to allow the international sale of elephant ivory. In July this year, Cites accredited China as a potential bidder for a one-off auction of ivory totaling 108 tons from four southern African nations: South Africa, Botswana, Namibia and Zimbabwe.

However, more than 20,000 African elephants are now estimated to be killed every year. It is hard to ignore environmentalists’ concerns that poachers will likely engage in “ivory laundering” on the sly behind legal transactions. In fact, poaching could grow, as a temporary supply of ivory increases demand.

Entering the 21st century when plastic can be used as a substitute, why is there an ivory boom at this late time? We are concerned that it might lead to the destruction of entire ecosystems.