Woo Young-mi, 49, a designer at Solid Homme, has marked her 20th anniversary in the business.

She opened her boutique in Apgujeong-dong, southern Seoul, shortly after the appearance of the so-called orange tribe, the name for the young, rich and beautiful who shopped for expensive designer clothes in this area in the late 1980s.

Since then, Woo has expanded her business into menswear. Solid Homme has more than 100 employees and it made inroads into the Paris Collection in 2002. 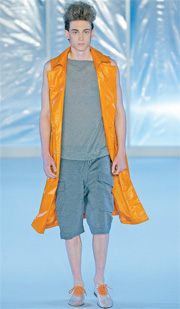 Her menswear contented the sensitive taste of the orange tribe and stars from the 1990s such as Lee Seung-chul, Lee Seoung-hwan, Sang Yoon and Park Joong-hoon.

After the 1988 Seoul Olympics, an influx of foreign trends helped to create the orange tribe, reflecting the culture of students studying abroad in the United States.

“In the late 1980s, classic suits were in style. The double breasted jacket, commonly called the ‘double’ was very popular,” Woo said.

The wide collar, loose-fit jacket became the trend in the 1990s. The “cocoon style” coat favored by women for the last two to three years is very similar to the long coats of the 1990s, too.

Behind every trend there are celebrities. Woo tells a story about how stars as trend leaders and fashion designers as trend introducers used to share their ideas and develop fashion more rapidly.

“Lee Seung-chul used to visit the boutique early in the morning to chat over coffee and order his clothes. He even asked a favor, which was to make his suit better than any other star on stage,” she said.

A three-buttoned suit may be a common style now, but in 1995 it was a landmark in ready-to-wear lines.

“This was the influence of an orthodox classic style, since the three-buttoned suit is the basic form of a men’s suit,” Woo said.

After the landmark of the 1990s, Korean men started to experiment with new styles.

In menswear of the late 1990s, there was a new genre called “character casual.” This was about the period when Solid Homme’s identity stabilized.

Character casual was lighter than the classic suit and more formal than the existing casual. Polyester material was popular in making the style. Polyester, which is not stiff and flows with the body’s curves, was the biggest contributor to the “close-fitting line.”

“It was a period when the developed consumers of the late 1980s actively started to find their own style,” Woo said. This was why these types of clothes were so popular and could be worn with confidence.

In 2003, Hedi Slimane, head designer of Dior Homme, made a remarkable modification in the silhouette of menswear.

Skinny male models started to wear tight-fitting suits on the runway. The blouson jacket, which is between a jumper and a jacket, which was introduced during this period, too, became very popular.

In 2005, the prominent change in men’s suits was the emergence of the one-buttoned jacket.

It was quite unconventional but domestic consumers accepted it without much protest.

“During the past 20 years of Korean fashion history, Korean menswear has gone through a great deal of change. It would’ve taken at least 50 years in other countries. The changes have been particularly profound, since men now have greater interest in trends and are bold enough to try new styles,” Woo said.

Her daring pieces from the Paris collection were sold right away to a domestic consumer.

“It was knitwear made for show. I cut the V neck deep until right above the belly button. I was planning to reform it more gently when it goes in the show window for sale but the bold style itself was sold,” she said.

She found the energy to be a menswear fashion designer from the consumers.

“Since the number of single men is increasing, they have more leeway to catch up with the latest fashion trends. In addition, there are more consumers with much bolder taste than before, which makes the menswear industry in Korea more competitive,” Woo said.

After looking back over the past 20 years, Woo finished up by saying, “Menswear designers should focus on trying to make men look as good as possible, making them look gorgeous.”