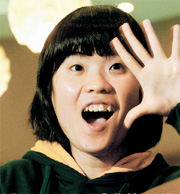 Who said only the prettiest of the pretty get all the attention?

Her roles in the comedy show so far have encompassed an ugly queen abandoned by her king because of her disgraceful looks and parodies of funny-looking people, the kind of stunts usually played by male comics.

But Park isn’t embarrassed at all. In fact, she says she deliberately pursues wild characters.

“Well, why not [be edgy]?” she asks, during an interview late last month at the KBS main building in Yeouido, western Seoul.

“Everyone has his or her own style,” she said. “There are comedians who move the audience to laughter with humorous words, but I use my body to make people laugh.”

She says there are different ways in which you can crack a gag: using words, the body and the face.

She compares herself with a veteran TV comedian Shin Bong-seon.

“While Shin expresses wild humor with her acting and wisdom, I compete with my unrefined way of talking,” Park admitted.

She never recoils from breaking taboos and making fun of others, and she never wears make up.

She is who she is.

The truth is, ever since she had skin trouble in high school, she has never worn cosmetics.

Fortunately, the characters she plays don’t need to dress up or look pretty.

In contrast to her light and amusing image, Park is actually a senior majoring in education at Korea University, one of the most prestigious schools here.

Her career as a comedian began last year, when she was preparing to become a recreation instructor. She was studying for a teaching certificate and after two months sat behind a desk, she had had enough.

“I had no aptitude for studying and I wanted to try something more lively, like being a social events organizer,” she said.

It was at this point that she auditioned for KBS at the TV station’s annual comedy tryout.

She made people laugh and got hired.

Even though her career is blossoming, Park has to go back to school next March to take her teaching practice. She was only allowed to take a two-year leave of absence from Korea University.

Of course, she has other options when she restarts her major.

“As a trainee teacher, I can use laughter to teach my students,” she said.