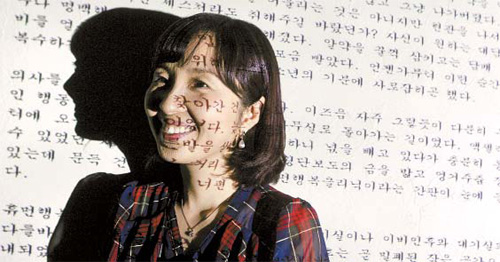 Writing her first online serial, Jeong I-hyeon got used to a series of unusual habits.

Using a special host ID, she snuck into Kyobobook.com, an online bookstore where her serialized novel has been running since August, and shifted around a few adverbs and slotted in some new phrases.

Her readers could spot these changes simultaneously and comment accordingly.

Writing an online novel has endowed Jeong with both freedom and restraint. She can change the text at any time of the day, but for that privilege, she has to endure, at times, overbearing levels of intimacy with her readers.

“You Don’t Know,” Jeong’s latest novel, is an urban family drama spiced up with the ingredients of a mystery novel. 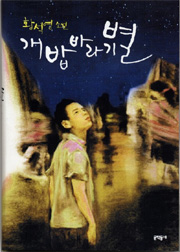 The story is uploaded every weekday morning at 10:30 a.m. By early afternoon, a string of comments follow at the end of her story, a mix of cheers and jeers.

The responses from her readers are nigh on immediate and come in overwhelming numbers. In the first week, the story attracted 500,000 visitors, a figure that reflects the standing of the novelist as one of the nation’s most popular writers.

She sold over 250,000 copies of her first novel, “My Sweet City,” and has also put together a book of essays and a collection of award-wining short stories.

The fervor behind Jeong’s new novel conveys the growing interest in an emerging phenomenon in Korean literature: online serials by noted writers.

In a country that once marked itself as an “Internet democracy,” this is seen as a rare move to break away from long-held literary taboos, a form of puritanism that regards online novels as superfluous and vulgar. 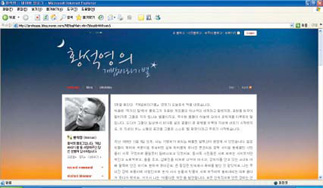 Yet this new trend in publishing is whetting the appetites of publishers and writers today.

Unlike CDs or DVDs, which were virtually wiped out by file-sharing sites, online novels are seen as a way to help promote the sales of paper books.

And so far, so good, it seems.

A few months ago, Hwang Seok-young, who is often referred to as the “national writer” of Korea, serialized a coming of age novel set in the 1960s. He posted the novel in serial form on his blog at Naver, one of the country’s largest portals.

Partly autobiographical, the story - “Gaebap Baragi Byeol” - is about a young Korean man waiting to be shipped out to the Vietnam War.

Over a four month period, the story attracted 2 million visitors, a substantial portion of the 17 million visitor clicks that Naver gets each day. The story was later published in book form, and in just three months, it sold 250,000 copies, according to the book’s publisher.

“For me, writing an online serial is just part of the process of putting together a book,” Jeong admits. “I wouldn’t have done it otherwise.”

In a country where 90 percent of households has access to broadband Internet services, blogs have long served as a valid testing ground for users who write for a hobby. Korea has had many successful examples of power bloggers whose work has been published in book form or made into a movie or a TV drama.

In 1999, “My Sassy Girl,” an Internet serial by an amateur author about his eccentric ex-girlfriend, ran on a local portal site, attracting a huge number of hits. The following year, the story was turned into one of Korea’s most successful films, catapulting the actress Jun Ji-hyeon into stardom. 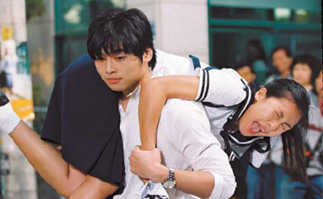 “100 Days with Mr. Arrogant,” a film based on an online novel by Guiyoni. [JoongAng Ilbo]

Several other online novels here gave birth to amateur writer celebrities such as Guiyoni, a teenage novelist whose tantalizing high school love tales have been turned into popular romance flicks like “100 Days with Mr. Arrogant.”

The work of Guiyoni - the writer’s Internet pen name meaning “the cute one” in Korean - were translated into Chinese and have sold over 600,000 copies.

But regardless of their soaring popularity, online novels have not always been treated seriously by domestic literary circles.

In an industry noted for conservative tastes, works of many Korean writers representing the country’s literary scene often reflected ideological conflicts and the grim fight for democracy that dominated much of Korea’s modern history.

The old myth about print media, though, is slowly diminishing as high-profile writers like Hwang choose to serialize their stories online. The idea has been picked up by local publishers who see the medium as a promotional tool to help boost sales.

Aside from Hwang and Jeong, other award-winning writers are in talks with major portal sites to run similar serials.

Among the names mentioned by the local press include Paulo Coelho, the popular Brazilian author of “The Alchemist” and “The Pilgrimage.” He’s is reportedly negotiating with Daum to run a series of essays.

This new digital environment for publishing stories, many in the industry say, is shifting the dynamics of readership, literature and the nature of writing.

“Contemporary writing has greatly reduced our time to contemplate when we read,” says Park Cheol-hwa, a professor of literary criticism at Chungang University.

“Ten years ago, a story under 25 pages would not even be considered as a novel. Today, a story that long would be seen as a secret code.”

In addition, Park says, the tone of writing has become faster, more intense and more aggressive.

Kang Tae-hyeong, president of Munhakdongne Publishing, the publisher of Hwang’s latest book and Jeong’s latest serial, observes that it’s a common misconception that readers of online novels are somehow more lightweight than readers of print versions.

He cites an incident when an anonymous blogger from an online bookstore pointed out critical flaws in the Korean translation of Arthur Danto’s “The Transfiguration of the Commonplace,” an essay on the philosophy of art by an American art critic, which was published here in 1996.

The controversy ended months later when another blogger entangled in the dispute requested an e-mail interview with Danto who admitted to errors in the Korean translation.

“The authority possessed by ‘power bloggers’ in Korea is beyond our imagination,” Kang says. “They function as a critic and an actual media. Publishers send them free copies of books to review, and writers consider their approval very seriously. They [bloggers] control the market to a great extent. Yet it’s tricky, because they are not trained critics.”

On a recent weekday evening, Jeong’s publisher arranged an open discussion with a small group of fans.

(The fans had each been asked to explain why they would like to meet the author, and those with the best reasons were selected.)

Surrounding the cheese platters and wine glasses in a cozy bar in northern Seoul were people meeting for the first time face to face.

Their number included a 17-year old high school student, a scholar from Boston and a housewife from a Seoul suburb who almost broke into tears when she was talking to the writer.

“I think for my generation the Internet has become part of our life,” says Park Su-hye, a 30-year old office worker in Seoul. “We’re used to seeing text on our computer screens and there’s nothing special about reading an online novel for us. It’s just one of many activities we do through the Internet.”

Nevertheless, the generation gap appears to be vast. Deep in the minds of older Koreans the sentiment still exists that not all novels are literature.

“You could call it elitism, a myth of writing or however you want to name it,” says Park, the professor at Chungang. “But I think there is still a notion that serious writers need to isolate themselves from the masses in order to create a great work of literature.

“There’s nothing wrong in writers looking at their work objectively through their interactions with the readers, but it would be hard for them not to be swept away by populist views.

“But literature is not a soap opera, and every writer needs to stick to the value they believe in from the start to the end.”