Why performing at the Met didn’t faze this tenor

Why performing at the Met didn’t faze this tenor 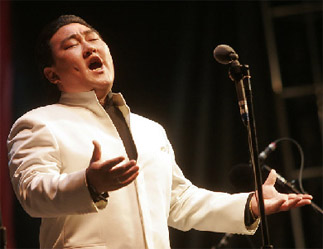 Rising Korean tenor Kim Woo-kyung will give a solo recital in Seoul on Thursday. Provided by the organizer

On stage, tenor Kim Woo-kyung is almost always either in a sleek suit or colorful costumes. So it was a bit of a surprise when, in an interview with the JoongAng Daily on a Friday afternoon at a downtown cafe, Kim looked like any Korean man his age, dressed in a white shirt and blue jeans.

“It will be an important rendezvous between me and the Korean audience,” the 32-year-old singer said about his first solo recital in Korea, set for Thursday. “I want to bring the best of me, and I think Robert Schumann’s ‘Dichterliebe Op. 48’ will do just that.”

Kim chose for the first part of the program the beautiful song cycle on a set of 16 poems by Heinrich Heine, which chronicles the arrival of spring and blooming love as well as heartache and love lost. He will also sing some more familiar songs from operas “Magic Flute,” “La Boheme” and “Carmen.”

After finishing his vocal education at Hanyang University in Korea and the University of Music and Performing Arts in Munich, Kim became a soloist with Semperoper Dresden in Germany.

But last year was perhaps his busiest, yet most unforgettable year. He played Alfredo in “La Traviata” at the New York Metropolitan Opera, becoming the first Korean tenor to star in an opera at the Met. The experience was all the more special as he performed with Korean soprano Hong Hei-kyung, the first time Korean singers sang both leading roles in the Met’s 127-year history.

“At first I was dumbfounded,” Kim reminisced as he sipped his Americano. “The first time I went in there for a rehearsal, tears ran down my cheeks. But soon I thought, ‘Well, the Met is just one of the excellent opera theaters in the world and I am also just one of many excellent opera singers.’”

Kim says he does not consider the venue as being all that important. Instead, giving his best is the most crucial.

Kim admits there is a sense of emptiness and loneliness in the performing arts, especially after the curtains go down and he goes home.

“But to me, everything is still new. Songs and performances take me to a new country, a new director, a new stage, a new role. I still have a lot to discover.”

Kim Woo-kyung performs at the Sejong Center for the Performing Arts at 8 p.m. Thursday. For more information, call the organizer at (02) 3461-0976.