[TV review]The harder you dig, the greater they fall

[TV review]The harder you dig, the greater they fall 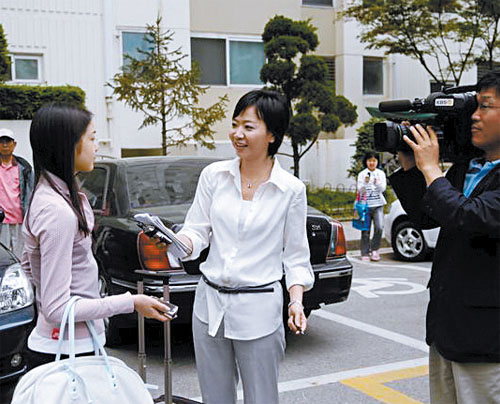 “I thought this was a blind date, not an interview.”

Hearing the man sitting across from me muttering these words brought me back to my senses. I realized I was on a friend’s set up, not on an interview for a story.

“Right,” I murmured back, suddenly growing almost mute, and I stopped bombarding the poor guy with questions about his profession.

Call it a reporter’s instinct (or illness).

“Well, after all, that’s what you reporters do, ask questions,” he said, with a sense of some great generosity to allow me to save face.

At least he was not calling reporters “parasites,” like the British filmmaker Peter Greenaway at a meet-the-press session at the last Pusan International Film Festival.

He also called most of the films at the festival “rubbish.”

This blind date anecdote in recent years is now a laughingstock, and good excuse for some of my friends to set me up, but I somehow got to thinking that a blind date is, after all, a kind of interview.

Also, every interview is like a blind date, in a sense. You can never guess what kind of person you might meet or anticipate what you are going to be talking about.

So the heart goes tense and flutters before interviews and blind dates.

I have to confess that I still get nervous, and full of hope at the same time, when I prepare for an interview, which is why the KBS-2 TV show “Danbak Interview” was one reason to look forward to 10:15 p.m. on Tuesdays and Thursdays.

No wonder I felt that the world was robbing me of one of life’s great pleasures when KBS announced that it was ending the show this month.

Danbak means “immediately,” “right away” and “on the spot” in Korean, and the show features an interviewer going one-on-one with a talk-of-the-town figure.

The rock of the show is M.C. Kim Yeong-seon, a gutsy, 30-something woman who shoots questions from the hip.

It was a pleasure to see politicians sweating over questions about sit-down strikes and walkouts that paralyzed public transportation.

The show grabbed my attention because I’ve long wondered why there are no Larry King or Barbara Walters figures here that are not afraid to really probe interviewees.

Most interviewers here are like angels and rarely ask aggressive questions.

But this show has the potential to be a Korean version of a Barbara Walters’ show, although Kim was pretty soft in many of the celebrity interviews.

The best bit of the show were the last few minutes when the M.C. asked her interviewees to sing his or her favorite song.

Wendy Sherman, a former advisor for the White House, sang “God Bless America,” and others chose tunes from different musical genres in a variety of languages.

The last series of interviews, however, fell flat. Kim softened up when talking to actress Yun Seok-hwa, who had recently made a comeback following a scandal last year concerning forged academic credentials.

I waited for the M.C. to ask the most obvious question, “Why did you lie?” But this simple question never got asked.

Instead, we heard stuff like “Didn’t you regret coming clean?”

What a yawn, especially when the actress started bawling.

I developed an urge to invite Kim on to her own show to be grilled but, well, the show ended anyway, and I’m crossing my fingers to see if a similar, and better, interview show pops up on television.

After all, the beauty of being a reporter is to ask questions and dig deep into all kinds of people.