Many pensioners’ nest eggs have been fried in the flames of the recent economic firestorm.

So it’s no wonder that retirees here are increasingly looking to spend their twilight years in countries where the cost of living is lower than in Korea and where harsh winter winds are a distant memory.

Wealthier and living longer than ever before, many senior citizens are searching for quiet, rural areas with a pleasant climate where their pension can stretch further than the costly streets of Seoul and the nation’s other major cities.

Where are they heading? Not to the established destinations in Canada, the U.S. and Oceania but to Southeast Asian countries such as Malaysia, Nepal, the Philippines, Thailand and Vietnam as well as Fiji.

The phenomenon is commonly called retirement migration and it’s on the rise.

At last year’s Korea Emigration Fair, organized by the Korea Trade Fairs, 5.6 percent of the visitors visited the fair to receive information about retirement migration. This year, 13.7 percent of the total visitors did.

The Ministry of Foreign Affairs and Trade recently announced that the number of Koreans who have emigrated has risen 64 percent in the past decade.

Another sign is that agencies specializing in emigration have sprouted up in recent years.

There are currently 173 such agencies officially registered with the Ministry of Foreign Affairs and Trade, but in 1996, there were only six.

The attraction of spending one’s retirement overseas is inevitably financial.

Local emigration agencies who facilitate moves overseas suggest that a retired couple can get access to a private stretch of beach, spa facilities and a year’s golf club membership for less than 2 million won ($1,382) a month in Thailand.

Top to bottom: Visitors receive information on retirement migration at the Korea Emigration Fair last year; Korean retirees play golf in Chiang Mai in Thailand; and a retired couple who emigrated to Kuala Lumpur in Malaysia pose in front of their house.[JoongAng Ilbo]

“It’s all about comfort,” says Kang Hyun-oh, the founder of Club Eagle, a travel agency that helps Koreans make the move to Thailand.

Four years ago, Kang set up a golf touring company called Club Eagle after he saw Koreans in their late 50s enjoying long-term stays in the Thai kingdom.

The company is currently building a Korean village that will house up to 100 houses for retirees in Hua Hin, southwest Thailand.

Club Eagle targets Koreans who are “suspicious” about living abroad for the rest of their lives.

The company offers field trips to Thailand for potential clients, giving them a chance to see if they like the country. 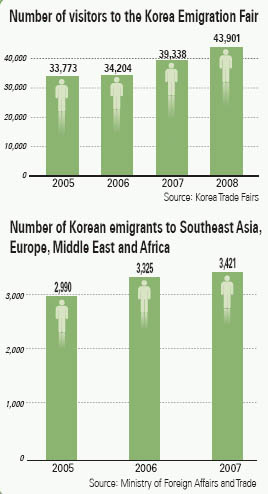 Ten families have signed up with Club Eagle in the past 12 months and moved to Thailand and Kang anticipates more customers when the economy shows signs of improvement.

To acquire a retirement visa in Thailand, you must be over 50 and be entitled to a pension worth 2 million won a month.

Plus you need proof of 30 million won or more in your bank account.

“Almost anyone in Korea has the opportunity to make this transition to retire overseas,” said Park Kyung-soo, 60, who runs his own education business and is considering emigrating to a country in Southeast Asia in the near future. “It’s a matter of choice now but not necessarily an easy one,” he said.

Unfortunately, as with any burgeoning business, the path to one’s dream sunset is not always free of obstacles. According to the Korea Consumer Agency, 115 cases of customer dissatisfaction were reported last year. The incidents concerned contracts that were allegedly fraudulent and excessive delays in the immigration process.

The upshot was an increase in the number of agencies because it was a lot easier to gain the necessary credentials, he said.