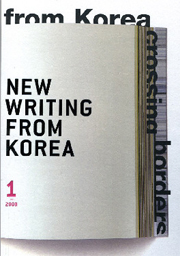 The inaugural edition of “New Writing from Korea,” a collection of short stories and poems, chooses Korea’s changing face as the theme for its special section, Crossing Borders.

These five stories are the most engaging in the book.

“Brown Tears” by Kang Young-sook tells the story of one Korean woman’s experience with two very different kinds of foreigners.

The first is a group of three Sri Lankans who live on the second floor of her building, “down the hall from me on the far left.”

She is curious to know more about their lives so she can learn from the quick glimpses in the door when walking by or the unfamiliar pine smell their apartment exudes.

The person who captures the narrator’s attention the most is a “squat” Southeast Asian woman.

“Her skin was dark as though it had been drenched in molasses, and her big brown eyes grew wide with surprise at the drop of a hat. … With her feet perpetually stuffed into those purple slippers of hers, she’d prop her chin on the clothesline and stare vacantly as the clouds passed by.”

The second type of foreigner she comes in contact with is Nathan.

Searching for something to fill the void in her life after a rough breakup with her boyfriend, she enrolls in an English class.

The narrator says: “I guess I was a little surprised by the realization that there were all sorts of men out there in the world, men of all different nationalities walking around out there leading respectable, everyday lives.”

Nathan’s principal hardship comes when his grandmother has complications during brain surgery and he has to go back to Australia for a while.

He shows up in class red-eyed from crying before rushing to the airport.

Kang does nothing to negate Nathan’s decency as a person, but his blond-haired, blue-eyed world stands in stark contrast to the people who live in her building.

The story illustrates the different experiences Korea’s foreigners have depending on where they are from and what they do for a living.

For instance, her neighbor is forced to root around in dumpsters for a living after the police identify the threesome’s main breadwinner as a suspect in downtown subway attacks and take him to jail.

Other stories that provide a good read include one about a cameraman who feels compelled to film in dangerous places after receiving an organ transplant from a death-row inmate in an unidentified country.

In another, “Elephant,” a Nepalese-Korean boy describes life in his migrant worker community.

Author Kim Jae Young captures the mood and feeling of the workers’ lives.

She vividly depicts their living quarters and the cycle of desperation and despair that traps so many migrants who come to Korea expecting to make a pile of money but wind up trapped in jobs or relationships that they can’t escape.

The collection has poetry, too. While most of it is too abstract for most readers to enjoy, there are gems.

In “Sleeping on the Street,” the poet addresses his body.

“Removing your clothes like old newsprint/ I lay you down raw on a damp mattress and look down on you./ Your gnarled hands and feet have lost their vigor/ How weary the skinny limbs and ribs look./ I’m sorry.”

New Writing from Korea’s editors plan to make it an annual series.

The net they cast in their first effort catches some real beauties.