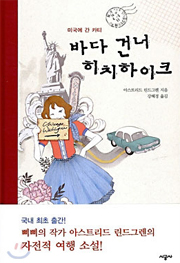 The author of “Kati in America” is none other than Astrid Lindgren, a Swedish children’s author best remembered for “Pippi Longstocking.”

Kati is a 21-year-old office worker who lives in Stockholm, Sweden, and whose boyfriend Yan encourages Kati to take a trip to the United States.

Yan boasts that he knows everything about the U.S. after coming back from a two-week trip there. Kati decides to head west to North America, but her aunt, who has raised Katie since the death of her parents, agrees to the trip on the condition that she accompanies her niece.

In New York, the two Swedes make their first American friend, Bates. Staying at Bates’ house, Kati experiences the life of a typical American family. She notices that Americans never use a knife and fork together when eating dinner and that women who don’t have a date for a Saturday night are considered losers.

Kati accidentally befriends Bob, whom she meets at a party. Bob and Kati travel together to Bob’s house near Washington, D.C.

Through him, Kati learns how Americans watch movies, why they eat popcorn in the cinema, the joys of hitchhiking and how important it is for American parents to educate their children.

For a Swedish country girl, the U.S. is an “exciting” country, but she soon encounters the darker side to life in the States. In addition to the glitz and the cherry pie, she finds herself in a complicated society riddled with racism, appearance-based judgments and environmental problems that stem from industrialization.

The story is evocative of life in the U.S. in the 1950s, seen through the eyes of a young traveler from Europe. By Lee Ji-eun