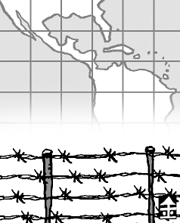 Cuba’s famous patriotic song, “Guantanamera,” is a familiar tune around the world.

We still sometimes hear it on the radio. A love song dedicated to “a girl from Guantanamo” finds its setting in the Guantanamo Province at the southeastern part of Cuba that became a focus of global attention in the wake of the Sept. 11, 2001 terrorist attacks in the United States.

The history of the U.S. presence in Guantanamo Bay dates back to the Spanish?American War in 1899. The U.S. assumed perpetual territorial control over the harbor under the 1903 Cuban?American Treaty for its role in helping Cuba gain independence from Spain. Under the treaty, the U.S. can lease the 116-square-kilometer (45-square-mile) area - nearly twice the size of Manhattan Island - for $4,000 per year for naval use as long as it wants to.

The Cuban government has repeatedly demanded return of its land since the 1959 Cuban Revolution, but Washington wasn’t ready to part with its oldest naval base.

The U.S. has paid its lease only once since Fidel Castro took Cuba’s helm because he has refused to cash Washington’s check, claiming the U.S. occupation of its land is illegal.

Surrounded by land mines, Guantanamo Bay is an enclave cut off from other Cuban soil. Therefore, the area had remained long forgotten by outsiders and media.

The bay recently gained its infamous reputation due in part to its isolated condition.

After the U.S. declared a war on terror after the Sept. 11, 2001 attacks, President George W. Bush decided to make the area the main prison for Al Qaeda members or suspects it considers “unlawful enemy combatants.”

Since then a series of reports and testimonies on torture, humiliation and sexual harassment of detainees raised serious questions about American morality.

A critical portrayal of prison conditions had already been depicted in the 1992 Rob Reiner film “A Few Good Men” that recounts a murder case among fellow Marines in the U.S. Guantanamo naval base.

Barack Obama, the U.S. president-elect, last week announced a plan to close the detention camp at Guantanamo Bay as an effort to rebuild “America’s moral stature.”

His comments remind us of the last dramatic scene in the film.

One Marine, confused by his sentence of discharge, asks “What did we do wrong? We did nothing wrong!” His fellow Marine, also handed the same sentence, humbly remarks, “Yeah we did. We were supposed to fight for the people who couldn’t fight for themselves.”