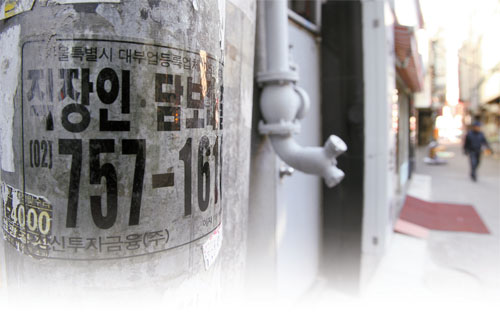 
The advertisements are everywhere - on stickers, flyers, automated telephone messages and spam text messages that promise to deliver quick cash to people in desperate need.

As the financial crisis is starting to affect the real economy, people in the low-income brackets are being pushed to the brink. Those needing cash but not in a situation to take out loans from banks are getting swallowed whole by loan sharks and their murderous interest rates that can reach over 1,000 percent per annum.

The financial troubles of low-income earners can be heard daily on the help line operated by Korea Consumer Finance Association for victims of loan sharks.

The help line service is located on the second floor of the Korea YMCA building in Sogong-dong in northern Seoul. The calls vary.

One call was from a 22-year-old university student who took a loan out of desperation after his father had a motorcycle accident.

“My father had an accident last month and I was really in need of money. While I was considering my options, I came across an advertisement offering loans of 500,000 won ($330) to 1.5 million won a day and was available 24 hours a day,” said Lee.

Lee called the number he found near the bottom of the advertisement and asked about a 1.5 million won loan. The person on the other end of the line told him the interest on a one million won loan would be 300,000 won every ten days.

If Lee were to defer payment, the same amount of interest amount would be applied every ten days.

Lee felt he had no choice. He agreed that he wanted the loan, and immediately got 1.05 million won deposited into his bank account, minus 450,000 won in up-front payment.

“I have paid total of 1.35 million won in interest to date. Although I took the loan out of desperation, the interest rate is ludicrous. When I recently missed my payment, someone from the loan shark called and threatened me. I don’t know what to do and need help,” said Lee.

Lee had taken out a private loan targeted for those in urgent need of cash. The yearly interest rate on Lee’s loan totals 1,500 percent.

The maximum legal ceiling on interest rate on such loans is 49 percent.

Another victim was Park, a 27-year-old office worker residing in Anyang, Gyeonggi. Park’s story is a bit different; Park is a victim of loan fraud.

Park, much like Lee and other victims, found the phone number of a loan shark on an advertisement. She needed to move immediately and he was short 15 million won.

“The operator told me I had to make a deposit of 250,000 won per 5 million won borrowed. I went on to deposit 750,000 won into the bank account that was specified by the operator. However, when I checked my bank account balance, the amount which was promised was not there. When I called back, another person answered the phone and made derogatory and sexually explicit comments to me,” said Park.

Naturally, Park wants to get her money back but there’s little chance of that. She’s a victim of loan fraud involving phone lines registered under false names. The chances of recovering the money: next to nil.

Han, a 50-year-old housewife and a resident in Busan is suffering from her younger sibling’s loans.

Han’s brother ran a bakery in the same neighborhood where Han lives but things went awry and he has gone into hiding after failing to pay interest on money he borrowed from loan sharks.

“My brother disappeared one day after his bakery began to suffer. The troubles began when loan collectors, six in all, began coming around everyday telling me to find him. The apartment unit where my parents live was in my brother’s name but has been provisionally registered under a different name and my brother put it up as loan collateral for approximately 200 million won. Furthermore, my brother’s bank account shows a steady outflow of payments to large loan companies,” said Han.

Han does not know how to handle her brother’s financial debacle but since she does not have her brother’s contact information or phone number, there’s not much she can do to help.

The stories that this reporter heard on one particular day at the center were all related to extremely high interest rates, loan payments collected in daily installments and loan fraud. It appears that the law capping private loan interest rates at 49 percent yearly might as well have been written on the other side of the globe.

“The majority of calls these days relate to loan fraud by people who take interest payments up front and are never heard from again. I would have to guess that those looking to take advantage of desperate people through high interest rates are turning to fraud,” said Lee Jae-sun, the director of the help line.

“Those offering to help obtain bank loans and take 10 to 15 percent commission up front but do not complete the transactions is on the rise,” said a worker at the Financial Supervisory Service.

People with poor credit rating are being ignored by registered private lenders. Korea Consumer Finance Association’s survey of all loans during the last quarter of the calendar year made by 45 of the largest legal private lenders revealed progressively shrinking loan amounts. In July, the loans totaled 188.6 billion won. That decreased to 162.7 billion won in August, 110.5 billion won in September and 88.5 billion won in October.

“The decrease in the amount of loans by private lenders is due to the financial crisis. These lenders themselves do not have as much resources as in the past. As people in the working class continue to struggle from the effects of the financial crisis, illegal loans will thrive,” said Joo Hye-tak, a mid-level manager at Korea Consumer Finance Association. The numbers do not lie. The number of reported illegal loan victim cases numbered 47 in August and it has risen to 121 in October.

According to research done early this year by the Financial Services Commission, those receiving private loans numbered 1.89 million, or approximately 5.4 percent of the adult population of Korea, and the total amount of loans was approximately 16.5 trillion won. Out of that number, the total number of people who got loans from unregistered loan sharks was 330,000, or 17 percent.

That’s not to say that registered loan providers are safe to use. The listed registered private lenders in Korea number 18,000; approximately half of those claim to be able to make immediate loans. According to the help center, these are groups that send out spam or text messages at random.

“Of the registered private loan providers ... those who stay within the limit on interest rates in accordance with the law are in actuality nonexistent,” said Hong Jae-beom of Pukyong National University’s Department of Management and Administration.

Lee at the help center added: “Loan sharks operating with 200 million won or less pay upwards of around 20 percent of interest and therefore that makes it hard for them to stick to the law that mandates a maximum 49 percent interest rate.”