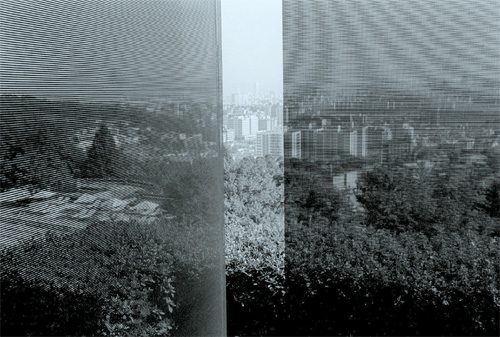 Of the many photographs that are sold every day in the contemporary arts market, city images have long been considered a favorable commodity. Perhaps the familiar images of urban life allow artists to approach the audience more easily.

Capturing city images also charmed veteran Korean photographer Joo Myung-duck, 68. Some 75 of the artist’s photos of sites in Seoul and the Gyeonggi area are currently on display at the Daelim Contemporary Art Museum in Tongui-dong, central Seoul.

The exhibition, titled “Cityscape,” is the first series of the artist’s three displays at the museum over a period of three years. The themes of the 2009 and 2010 exhibitions are nature and traditional sites in Korea, respectively.

There’s no doubt that Joo is a prominent figure in Korean photography. For the past 42 years since his first solo exhibition, “Mr. Holt’s Orphanage,” in 1966 at a gallery in Seoul, Joo has been depicting critical social issues in his works. 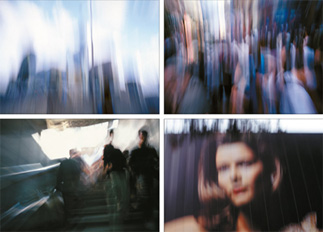 Mr. Holt’s Orphanage gained Joo fame and raised public attention on the issue of Korean War orphans, which was neglected by society back then.

To Joo, photography played a role beyond art - it was a tool to overcome social problems that minorities face, to bring change and to record historical hard times.

For this latest exhibition, Joo focuses more on the present rather than on moments of history. At first glance, images displayed of the capital seem ordinary or even bland. He doesn’t capture specific objects like trees or flowers but a blurry image as a whole.

“Various images taken by Joo are creations of the mass media,” said Park Joo-seok, a professor of photography at Myongji University and also the exhibition’s organizer.

Joo’s recent photos capture modern icons produced by mass media such as bright lights, neon signboards, show windows and posters. He shoots sites where he mainly strolls around like Gwanghwamun and Myeong-dong in central Seoul, Yeouido and streets near Hongik University in northern Seoul and Ilsan, Gyeonggi, where he resides. Conventional images of a city like buildings, asphalt and concrete are hard to find in his work.

“The basic philosophy of any photograph is expressing the beauty surrounding us. In addition to beauty, Joo is very critical towards modern civilization,” Park said.