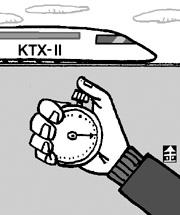 The world’s fastest passenger rail service, Alstom’s TGV Est, runs between Paris and Strasbourg at a top speed of 575 kilometers per hour (357 miles per hour). With its successful debut in April 2007, the upgraded French bullet train outshined its competitors, ICE of Germany and Shinkansen of Japan.

In speed, Shinkansen still holds the world record of 581 kilometers per hour, set in 2003. But at that time it ran on the maglev system, which is impractical for commercial use due to engine overheating and weight problems. The French high-speed train normally shoots through Europe at 300 kilometers per hour.

The world’s fastest car, the GTBO, is designed and manufactured by Britain’s Acabion. The concept car showcased a top speed of 547 kilometers per hour in February. The 360-kilogram (794-pound) dolphin-shaped two-seater is capable of a scorching 480 kilometers in just 30 seconds, but remains out of reach for most petrol-heads at a price tag of over $2 million.

In the sky, Lockheed’s SR-71, or the Blackbird, stands out. The long-range strategic reconnaissance aircraft can reach a speed of Mach 3.3, (4,000 kilometers per hour for laymen) much faster than the Concorde’s once-proud cruising speed of Mach 2.23.

The 21st century is an era of speed. History substantiates that speed corresponds with power. Genghis Khan built his Mongol Empire with the help of his efficient horseback archers while German military hero Erwin Rommel roamed North African deserts with his Afrika Korps tanks during World War II.

Greater speed can take mankind to higher and farther places. We can attain more information and get more work done in less time. Speed can accelerate growth while growth presses on for more speed.

Today some talk of a “speed virus.” They complain that people having difficulty keeping up with society’s obsession with speed are being left behind and neglected. Meanwhile, Mother Nature and her resources are falling victim to the human thirst for greater speed. One year’s worth of global energy consumption eats up a 1-million-year accumulation of fossil fuel. Excessive consumption of fuels like oil and coal are fanning global warming.

On Tuesday, Korea joined the ranks of high-speed vehicle producers by rolling out the locally made KTX II with its 350-kilometer-per-hour capacity.

Korea becomes the fourth country after France, Germany and Japan capable of producing and operating a high-speed rail service that runs at over 300 kilometers per hour.

The speed hike will probably save time for passengers, but in a nostalgic sense, it makes riding the train much less romantic.

* The writer is a JoongAng Ilbo reporter who specializes in environmental issues.