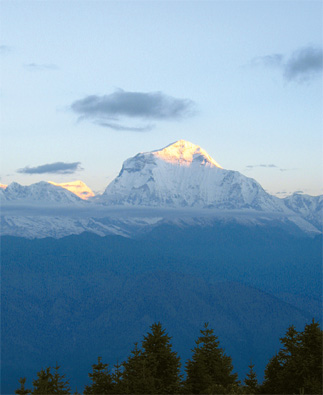 NEPAL - Climbing nearly 3,000 meters (1.9 miles) above sea level at five in the morning and extremely short of breath, I asked my Nepali trekking guide, “So how high is this mountain exactly?”

He turned around with a puzzled look and said, “You mean, this hill?”

And he resumed walking towards the peak of the “hill,” which he told me was 3,210 meters high.

Welcome to Nepal, the land of the high Himalayas and home of eight of the world’s 10 tallest mountains, where a peak 3,000 meters above the ocean is considered only a hill. Bordering China to the north and India to the south, the landlocked country has long been a dream destination for high-altitude adventure with more than 70 percent of its territory covered by mountains. 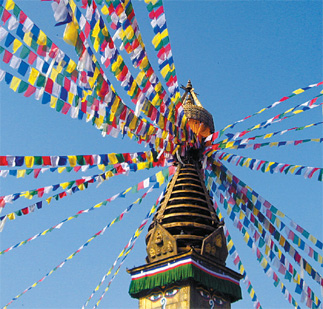 But think again if you believe the country is only a destination for serious mountaineers. Nepal, which attracts nearly 500,000 foreign tourists every year, offers an incredibly wide range of outdoor activities. You can not only enjoy the awe-inspiring views of the Annapurna Range and Mount Everest on trekking courses for novices but also paddle through gurgling rivers with the world’s most exciting whitewater rafting courses, take a hair-raising 160-meter dive from the world’s second-highest bungee jumping site, or enjoy paragliding beside the majestic Himalayas. And the upshot is that you can enjoy all these at costs that remain far lower than any other major destination with similar outdoor opportunities, despite recent inflation.

Those flying into Nepal will land at Kathmandu, the nation’s biggest city and capital. It teems with the crazy hustle and bustle of any developing global boomtown. Old streets full of ancient architecture and temples are seamlessly integrated with the increasingly urban landscape. Street vendors selling baskets of vegetables and fruit, Snickers bars and cell phones stand side by side with stupas that are hundreds of years old and Hindu statues. Even Durbar Square, the heart of the old city and full of magnificent temples, is packed with street vendors, passersby and a ruthless flow of cars, motorbikes, bicycles and rickshaws. Even buffalo and other animal herds are ready to run over your feet if you don’t move quickly enough. So forget about serene meditation or a peaceful walk, and watch your feet when you stop for a quick photo. 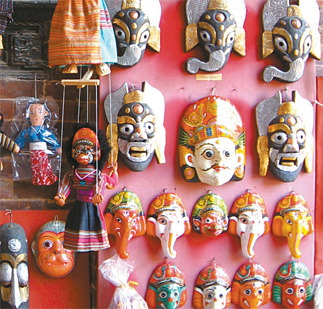 Hand-carved wooden puppets and masks at stores in Bhaktapur, a serene, peaceful city east of Kathmandu.

Drop by Kumari Bahal, a redbrick, three-story building with profusely carved wooden balconies and window screens, if you are interested in Nepal’s living child goddess. The place is home for Kumari, who is believed to be the bodily incarnation of the goddess Durga. Kumari is a prepubescent girl selected through a rigid screening process that evaluates her health and lack of fear. She is revered and worshiped until she has her first period or sheds blood due to physical injury or serious illness. You may spot her waving to worshipping Hindus and Nepali Buddhists through the window if you are lucky.

If you are tired of the crazy Kathmandu clamor, a one-hour flight to the western part of the country takes you to serene Pokhara, the second-most-visited city in Nepal and the starting point for trekkers heading toward the Annapurna Range. Here you can start a three-week Annapurna Circuit route that climbs to as high as 5,416 meters, or a quick three- or four-day trek to Poon Hill observatory (3,210 meters), where you will be surrounded by a panoramic view of two of the world’s largest mountains - Annapurna (8,091 meters) and Dhaulagiri (8,167 meters) and enjoy a magnificent sunrise.

Don’t be afraid if you have little trekking experience. Quick trips to Poon Hill are often dubbed “baby treks” by locals, meaning they can be completed by novices like me and are nearly free of high-altitude sickness. Sure, you will need some stamina and physical fitness to trudge all the way past 3,000 meters, but those who are afraid of carrying heavy backpacks can hire a porter for around $10 a day. 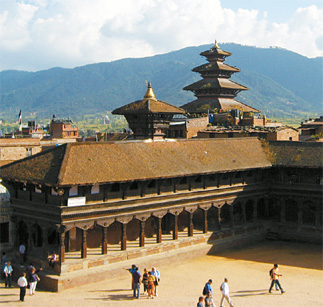 An ancient city landscape in Bhaktapur. The entire town is designated as a Unesco World Heritage Site.

Small, mostly family-run lodges for often less than $2 a night dot the trail nearly every 20 or 30 minutes, though the rates tend to rise the higher you climb. Familiar with a constant trickle of Western travelers, they offer a wide range of food from fried noodles and omelets to Tibetan food and Indian curries. You can even find pizza, pasta and pancakes. But if you fancy Nepali food, order dal bhat, a traditional Nepali staple comprised of rice, lentil soup, pickles and curried potatoes, spinach or squash. It is by no means a delicate dish but trust me, nothing tastes better after a long day of trekking.

Some of the lodges have breathtaking views, so prop your feet up and look out a window at majestic valleys or enjoy a meal while gazing at the towering Annapurna and other peaks. By all means, it defines the phrase, “an experience you will never forget.”

If you return to Pokhara after days, weeks or months of trekking but miss the mountains already like many do, try paragliding along the peaks for an hour or more. October, November and December are considered the best times to hurl yourself off the slope and fly along the valleys. Up in the air, you can look down at the serene Phewa Tal lake, Pokhara’s most important landmark. The mirror-like water reflects the surrounding forest and high white peaks. Prices generally hover around $100 for trips lasting 40 to 90 minutes. 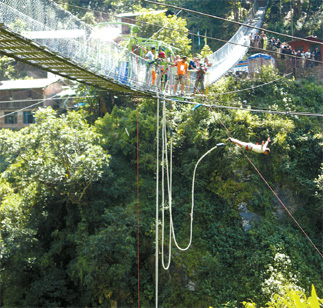 A bungee jumper dives into a gorge 160 meters deep at Nepal’s Tibetan border.

But if you are tired of mountain activities, try some adventures in the water to get a rush of adrenaline. Nepal is known as one of the best places in the world to enjoy whitewater rafting. The rivers crash down from mighty, high mountains through steep foothills, fed by monsoon rains and melting snow from the Himalayas. The country has nearly 10 major rivers offering great rafting, while the steepest, most thrilling and probably most dangerous route is Bhote Kosi river near Kathmandu. Once you’re in the boat, there may be little time to put down the paddle and admire the scenery because you will be too busy paddling through one roaring rapid after another. The river is Class V on the International Scale of River Difficulty, which ranges from I to VI depending on the level of challenge and water fluctuations. Class I means easy-moving water with few obstacles, while, from IV to VI, one should be active, confident and preferably have some rafting experience. But don’t worry, Nepal has plenty of rivers that offer far smoother and easier rafting.

Still hungry for more adventure? Then try the world’s second-highest bungee jumping site. Standing in the middle of a narrow suspension bridge and looking down the river gorge 160 meters below me, I worried about what I had eaten for breakfast. Four hour’s drive from Kathmandu to northern Nepal bordering Tibet, the “Last Resort” offers this bungee jumping experience in a valley full of squeals and screams of free-falling divers. My two cents? Leave your brain at the end of the bridge as the jumping instructors wisely recommend. Many people don’t and end up taking a small baby step off the platform, which reduces the fun of free diving. Spread your arms, try to jump as far as possible from the platform and fly like an eagle. The package of a one-day trip to the Last Resort, including transportation and a lunch, wisely provided after the jump, costs 62 euros ($80).


The best time to visit Nepal is from October to November. The monsoon season ends in September leaving the sky clearer than at any other time of the year. Most trekking routes are also free of leeches and heavy snowfall. December to January is also a generally good time to travel, although the weather will turn from balmy to harsh cold at high altitudes. Heavy snow may block some major trekking routes as well. The tail end of the dry season from February to April is also a good time to visit with flowers blooming everywhere, although the dust that has settled over the past several months may disrupt visibility of the majestic mountain views. Foreign visitors can get a visa after arrival at the immigration counter at the Tribhuvan International Airport in Kathmandu, with a visa fee of $25 for a stay of up to 15 days and $40 days for up to 30 days. Flight prices vary from roughly 900,000 won ($609) to 1.3 million won depending on the season and fuel price swings.