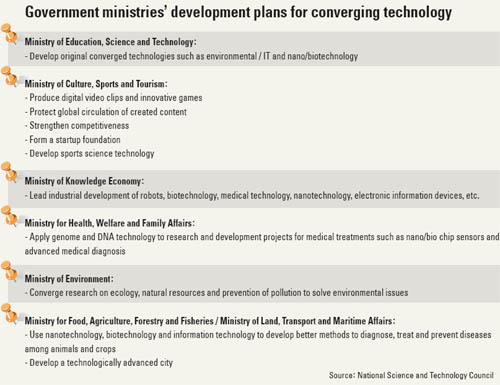 So-called converging technologies are playing a significant role today, and experts believe their future social and economic roles will be even greater.

Take the cell phone. Its original purpose was simple - it made phone calls. Today, the typical phone comes equipped with a camera, mp3 player and voice recorder. Smartphones do even more, as they are more like handheld computers with Internet connections than your father’s old rotary-dialed contraption.

And the cell phone is only one example of technologies that are rushing to unite. The payoff comes when experts form disparate industries are able to cooperate. For its part, the government is trying to fuel this combination. 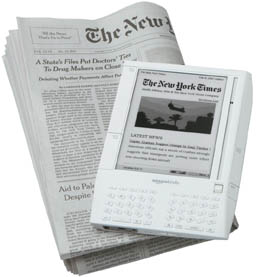 The Amazon Kindle is an electronic device that can store up to 200 books. Users can download books and newspapers from online stores.

This means Korea is now clawing its way further into the converging technology market that has been recognized for years as a key to the future by world powers.

A “Converging Tech Map” has been developed to guide standardization and development. Initially, neuroscience and environment?al technology were singled out.

Down the road, robotics, advanced materials, nanotechnology, pharmaceuticals, medical devices, information technology and the media will be included in the plans.

Steps are being taken to ensure an open and advanced developmental stage through “e-R&D,” a system that will share ideas and data from experts.

Under the proposed plan, government-supported research centers and universities will cooperate on curriculum development. And researchers will be able to be affiliated with more than one research institution.

Since cooperative initiatives between government ministries is important, research and development centers for converging technology are slated to open. 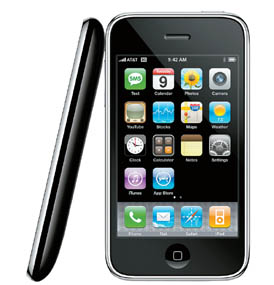 Apple’s iPhone 3G is the first mobile phone to use “multi-touch” technology. It also has a wide array of functions including Internet access.

“A total of 5.89 trillion won [$ 4.03 billion] is to be invested by 2013. We are currently in the process of preparing details, operational plans and follow-up measures for each year up to the completion date,” said Kim Yi-wan of the Ministry of Education and Science Technology.

“Up until now, converging technology development was limited by the narrow perception that it is a mere union of nanotechnology, biotechnology and information technology. In order to prepare for the complicated issues of the future and to deal sufficiently with a variety of economical and social demands, we have expanded the meaning of converging technology to include cooperative efforts among various organizations” added Kim. 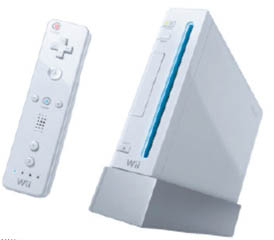 The Nintendo Wii is a video game console whose motion sensors capture the physical movement of gamers.

They are to be addressed not only through scientific and technological organizations, but through humanitarian and social ones as well.

While the idea of developing institutions that feature converging technologies is relatively new to Korea, prominent companies and research centers around the world have been developing and manufacturing products based on the theme for years.

Through these products, those firms and centers have been gaining a strong foothold in the market.

Apple is currently developing “data converging technology.” When completed, it will allow users to control their phones using a combination of voice, touch and sight.

Another example is the Nintendo’s Wii Fit system, which upgrades the standard video gaming experience by providing gamers an assessment of their movements through blending IT and sports gaming experiences.

And Hug Shirts, which contain sensors that read a person’s skin temperature and heart rate through Bluetooth technology on a mobile phone, can send the information to a friend’s cell phone.

Part of the reason the Korean government is strongly interested in converging technology is that development of new products through technology blending can boost the nation’s economy.

The government’s current plan is to stand shoulder to shoulder in the field with some of the world’s powerhouses.

In order get started down this road, the government held hearings from May to October with ministries and experts from various fields. Surveys were also conducted.

That’s not to say support for the field was previously nonexistent in Korea, only that the efforts were done in isolation by various ministries, research centers and companies. But there was no combined, single-minded effort to bring it all together.

“The lack of cooperation means the possibility of losing sight of the original goal. Instead, the competitive drive for development can result in lack of original ideas and technologies. The end results can be mere reproduction of new technologies from elsewhere,” said Roh Young-min, chief manager of the Korea Institute of Science and Technology.

“Converging technology supported by the government should distance itself from the efforts of private entities through a focus on the government funding basic research and building adequate infrastructure,” Roh said.

Choosing the right field of specialization is another important factor in the initial developmental phase.

“It’s not a good idea to merely follow the pack. We need to recognize which field is of strength to us and invest in those areas accordingly,” said Shin Yong-hyeon of Korea Research Institute of Standards and Science.

“Since converging technology is a riskier investment in comparison to other fields, the focus on numbers, sales and quick results isn’t wise. It is important during the planning of follow-up measures to focus on the need to set up medium- to long-term support,” added Shin.