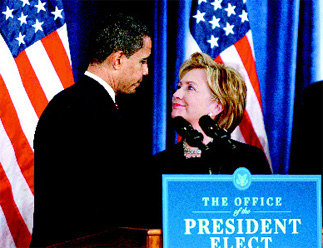 The recent nomination by U.S. President-elect Barack Obama of Hillary Clinton for the position of secretary of state has elicited a barrage of reactions from the world of punditry, ranging from excitement to caution. The most common reaction, however, seems to include at least some degree of surprise. Although Clinton can certainly be said to possess the experience necessary to take on the position, many expected that any cabinet position offered her would focus on domestic issues, such as health care reform, about which she is so passionate.

But a deeper look into the state of affairs that Obama will inherit in less than two months offers somewhat of an explanation for tapping Clinton to spearhead foreign policy. With America fighting [wars] in Iraq and Afghanistan and an economic recession unlike any seen in nearly 75 years, Obama will be forced to prioritize. His focus on organizing his economic team first is a clear indication that his priority at the outset of his presidency will be on the weakening U.S. economy.

A foreign policy expert from Chatham House in London recently pointed out that Obama’s choice of Joe Biden as vice president reflected his initial desire to install a highly experienced foreign policy maker directly in the White House in order to maintain a tight grasp on international decisions. However, the deteriorating economy, particularly during the last few months of the election campaign, has forced Obama to reassess this plan. His nomination of Clinton as secretary of state, noted the Chatham House expert, is likely an indication that Obama will be relinquishing some power over foreign policy and needed to install someone capable of independently running the U.S. State Department and overseeing foreign policy decisions.

What then makes Clinton the best person for the position? She has proven herself one of the most competent, successful women of the 21st century. From as early as college, when she became the first student to give the keynote address at her school’s graduation ceremony, to twice making the list of America’s 100 most influential lawyers, to becoming the first U.S. first lady to be elected to office in the government, Clinton has been breaking down barriers and impressing with her ability to succeed. Her eight years as first lady has made her a household name around the world, giving her higher overseas recognition.

Despite her apparent qualifications, concerns persist over a few areas of uncertainty. Throughout the primary campaign, foreign policy was the main area in which Obama and Clinton’s positions occasionally diverged. Clinton voted in favor of the war in Iraq, although she has since criticized the way in which it has been handled. Obama voted against the Iraq war, and has since called for the immediate return of U.S. troops. Obama has also stated his willingness to meet with heads of enemy states without any precondition, an idea which Clinton has opposed.

Yet these are truly small divergences, likely emphasized to differentiate themselves when they vied for the Democratic Party nomination. They are certainly not issues that alone could impede cooperation. To assume that Clinton would have trouble separating her personal goals from her diplomatic duties would be to vastly underestimate her professionalism. Similarly, after an impeccably run presidential campaign that illustrated his pragmatism and judiciousness, assuming that Obama would appoint someone to his cabinet without considering every possible angle would be to underestimate his capabilities. Another cause for concern in some circles has been the role of Hillary’s husband, former President Bill Clinton. Comments by President Clinton during the primary campaign occasionally sparked a negative tone, leading some to wonder whether the relations between Obama and Clinton would continue to be strained. Again, this is certainly an area that was addressed by Obama prior to considering Hillary Clinton for a cabinet post. Reports have also emerged that Bill Clinton may agree not to speak to the press regarding foreign policy issues without prior consent from the administration.

Ultimately, the nomination of Hillary Clinton to head the State Department could help bind the Democratic Party, giving Clinton a major role in the administration; it could placate those who turned against the Democrats when Clinton lost her presidential nomination bid and rebuild the Democratic base in preparation for their re-election in 2012. In the process, the foreign policy experience of Biden, and the toughness and stature of Hillary Clinton would combine to help restore U.S. credibility. That will be critical to overcoming the global economic downturn that is deepening, as well as maintaining world peace.

*The writer is a research associate at Samsung Economic Research Institute.