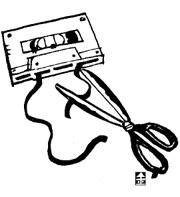 Censorship in Korean music has a long history, dating back to the days the country was under Japanese colonial rule (1910-1945). The Japanese regulated song books, stage performances, music recordings and even releases of church music.

After Korea was liberated with the help of the Allied Forces and the peninsula was divided into South and North Korea, songs by artists who fled to the North were banned. One of the policies of President Park Chung Hee and his military government was the legalization of censorship.

The authoritarian government censored music before it was recorded as well as what was broadcast. From 1965 to 1976, government censorship agencies changed names, but their prime task remained unchanged. Songs were labeled ideologically inappropriate, profane, or akin to Japanese art, and therefore banned.

But in 1990, folk singer-songwriter Jung Tae-choon protested the authorities’ tampering with his music by distributing unauthorized tapes, raising the contentious question whether regulating music prior to the release of the record was constitutional in a democratic country.

Later, music idol Seotaiji went the extra mile in the battle against censorship. When the government ethics committee asked Seotaiji and Boys to change some of their lyrics before the release of their fourth album, Seotaiji deleted the lyrics altogether, making one song simply instrumental.

In 1996, the Constitutional Court ruled that freedom of expression also applied to the music industry. From then on, it was up to the broadcasters whether a song was fit to be played on radio or television.

In 1997, a government agency was introduced, dedicated to protecting the youth from harmful material. The Commission on Youth Protection decided what music was appropriate for broadcasting.

This agency has recently come under fire for its broadcast ban on recent releases by Rain and Dong Bang Shin Gi. Lyrics and innuendo in “Rainism” and “Mirotic” from the two artists, respectively, were labeled improper and suggestive.

The songs had such lines as, “You want me. You are into me. You are crazy about me and can’t get away from me. I got you under my skin.”

But seriously, how provocative are these words, really?