In the past year, over 1 million volunteers have visited Taean, South Chungcheong, to help clean up after the oil spill. [JoongAng Ilbo]

TAEAN, South Chungcheong - On a relatively warm afternoon last Wednesday, Kim Ki-hyung, 58, was waiting for the local bus to arrive. He was heading to a market in downtown Taean to sell a half-full bucket of oysters he had handpicked that morning. 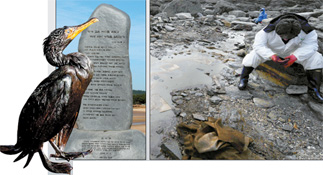 From left: A bird covered in fuel oil; A monument placed at Manripo Beach,Taean County, remembering the 1.23 million volunteers to help clean up; A local resident of Taean takes a rest while cleaning up the oil last Thursday. [JoongAng Ilbo], By Lee Eun-joo, Yonhap

He looked uneasy. The wrinkles surrounding his eyes reflected decades of exhausting work as a fisherman. And life’s tough times, he says, have weighed even more during the past year after Korea’s worst oil spill occurred in the West Sea near Taean, his home.

With the nearby seashore saturated with crude oil, Kim couldn’t sell seafood to local markets. Not only was seafood typically scarce, but even when abundant, there were few buyers. People worried that seafood caught from the western sea would be tainted.

Trouble began last December when a barge carrying a crane owned by Samsung Heavy Industries hit the Hebei Spirit, a Hong Kong-based oil tanker, in the sea off of Taean, South Chungcheong. A total of 12,547 kiloliters of oil spilled from the super vessel, contaminating about 30 beaches and 841 marine farms along the scenic shorelines on the West Coast. It was Korea’s worst oil spill after the accident in 1995 when 5,035 tons of black oil inundated the southern coast.

To the eye, the Manripo Beach in Taean County seems fully recovered from the last year’s oil spill. Photo by Lee Eun-joo

Tomorrow marks one year since the deadly oil spill. The town and market have begun to rebound.

Much credit is given to some 1.2 million volunteers from across the country who donned masks, protective clothing and rubber boots to clean up the mess. They formed a human chain that stretched along the 150-kilometer (93-mile) seashore, scooping up buckets of thick, crude oil and scrubbing pebbles and stones with felt cloths. Doctors were also on hand, writing out prescriptions. With united effort made by fishermen, soldiers and volunteers to recover from the spill, the ecosystem is slowly recovering, according to the Korean Federation for Environmental Movement, the largest local environmental group.

Last July, environmentalists observed many types of crustaceans reemerging near Sinduri Beach and other shores. The environmental group noted that the density of oil in the seawater is nearly back to normal. In other words, the quality of water is safe enough for people to swim. By last summer, beaches reopened for vacationers.

The first was Manripo Beach. Though it was the hardest hit area and the most damaged, it also received the most attention.

To celebrate the efficient and rapid clean-up operation and to thank the volunteers, the South Chungcheong provincial office kicked off a festival yesterday at Manripo Beach and Daecheon Beach in Boryeong. The festival ends tomorrow.

The regional government also erected a monument last Wednesday at the entrance of Manripo Beach. It is inscribed with a poem by Park Dong-kyu, an honorary professor at Seoul National University and whose father is the late poet Park Mok-wol (1916-1978). A verse writes, “In the faces stained with tar, I find magnificent love of human nature/ And now, the blue sea is back.”

But is the blue sea really back for the heartbroken locals?

All is not as it seems.

“We [Taean residents] are still weeping,” said Cho Yu-soon, who owns a seafood restaurant at Manripo Beach. The cry grew more desperate after they heard about the regional government’s plan to spend 80 billion won on building a historical museum in remembrance of the oil spill.

The residents who are still struggling to make a living think the money could be better spent.

For a month after the oil disaster, Cho, the restaurant owner, closed down her business. Flounder and flatfish caught from the sea no longer circulate in the seafood market. To sustain her living, she had no choice but to buy fresh seafood from Gunsan, North Jeolla.

“Many [tourists] still fear eating here because of the negative image they have of Taean,” the owner said, while gazing at the West Sea. She only makes 30 percent of the profit she used to make.

Kim Young-soo, a local residing in Sindeok-ri, has been picking out oysters all his life. In prosperous seasons, he earned 15 million won a year. “It was enough for me to pay my son’s expenses for medical studies in Seoul,” the fisherman said. The past year, he earned less than 3 million won and has plunged 50 million won into debt.

“Most locals that I know took out loans since our way of making a living disappeared overnight. Only if it weren’t for the oil spill,” he murmured, buried in grief. Though he’d been suffering from a chronic headache and anemia, he gulped down soju, traditional Korean liquor, in a paper cup. The only side dish was peppermint candy.

Other symptoms caused by the oil spill are indigestion, insomnia, skin problems and stress. The overpowering fumes of thick black oil blanketed the locals’ lungs, “which will still be impacting many years from now,” said Wang Jong-won, a physician in town. Kim said he hasn’t received compensation yet and there haven’t been notices of any long-term resolution.

The situation isn’t any better for fishermen in Mohang Port, also in Sowon-myeon in Taean.

According to Lee Yoon-kwan, the head of the Mohang Fishermen’s Cooperative Society, all fisheries close down when a hard wind blows and chunks of oil from deep down in the sea rise to the surface.

“Two years ago, fishermen caught abundant crabs - about 1 ton a year at the least,” Lee recalled while puffing a cigarette. “I have nothing to say about this year.”

Currently, Lee and other fishermen still around in Mohang are preparing a list of marine products lost to submit to the central government for compensation.

The Taean branch of the National Federation of Fisheries Cooperatives is doing the same. Since the fish catch is down by two thirds and it takes at least three years for oysters to settle in their beds, receiving compensation is crucial for fishermen here, says Choi Yong-ki, the managing director of the branch.

So far, the Taean locals received two small stipends for living expenses from the government. The amounts ranged from 600,000 won to 3 million won per family, depending on how far they lived away from the sea and how much they were affected by the oil spill.

The International Oil Pollution Compensation Fund has pledged early this year to provide compensation for the damages. And other funds come from donations collected by the regional government.

Distributing compensation, however, is difficult.

While the international oil organization has estimated the total compensation would be around 620 billion won, the locals have been strongly arguing for more. They call for around 2 trillion won.

Kim Yeon-bin, an official from the Ministry of Land, Transport and Maritime Affairs, says thorough and transparent research on the damages is crucial, which the Ministry will conduct until February. Compensation will be distributed in July.

“There will be more changes and improvements next year regarding the aftermath of the oil spill,” the official said.

Besides the Ministry’s efforts to bring changes to the lives of the locals, the Taean County Office held a global symposium late last month titled, “The Hebei Spirit Oil Spill and its Health Effects.”

It invited renowned environmentalists and personnel from the World Health Organization and discussed ways to overcome health and nutrition issues after the spill.

“A year isn’t enough to look back upon such a tremendous oil disaster,” said Lee Pyung-joo from the Seosan-Taean Korean Federation for Environmental Movement. “Though it is painful for the locals, time is the only remedy. A hasty effort to resolve the aftermath of the oil spill just isn’t right.”