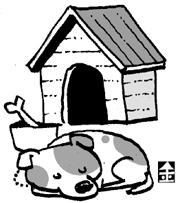 Pompeii was completely buried during a catastrophic eruption of Mount Vesuvius in 79 A.D. The city was lost for nearly 1,700 years before its accidental rediscovery in 1748. Since then, its excavation has provided an extraordinarily detailed insight into life at the height of the Roman Empire.

Of particular interest is the warning, “Cave Canem,” which adorns many ancient dog mosaics at the thresholds where houses open to the streets. The Latin Cave Canem means “Beware of the dog.”

It was long ago that domesticated dogs began to live with humans. The earliest fossil of what is believed to be one of the first domesticated dogs was found along with human remains in a cave in the Middle East, about 14,000 years ago. Recently, however, some scientists said that the world’s first dog lived with humans 30,000 years ago or even earlier, since remains of a dog thought to be 31,700 years old were discovered in a cave in Belgium.

Experts estimate that dogs were domesticated from wolf ancestors in East Asia about 15,000 years ago, based on DNA analysis of more than 500 dog species worldwide. Dogs were probably the first animals to be tamed. They provided humans with fur, leather and meat, and shouldered the responsibility of hunting or carrying loads.

Dogs have achieved huge success in terms of evolution. Wolves have been reduced to around 100,000 and are considered one of the world’s most endangered species. Dogs were wise to take up residence with humans, and were smart enough to learn right from wrong.

A recent study by Austrian scholars showed that dogs can feel jealousy or envy when they become aware of unfair circumstances. For example, if one dog gets no reward, and then sees another get a treat for doing the same trick, it suffers stress and frustration. A homeless dog is Chile’s newest hero after it risked its life to help a canine companion. A surveillance camera caught the dog running past speeding cars on a busy Santiago freeway to grab the body of another dog that had been fatally hit by a vehicle.

There are many stories in Korea about dogs making the ultimate sacrifice - giving up their lives for their master. These dogs are fearless by nature and are known to defend the master from attack by ferocious wild animals even if it could result in their own death.

In this regard, people should be ashamed of how easily they abandon their pet dogs, just because they want to be free to go away during the holiday season.