“Bodhisattva,” dubbed “the Venus of the East” because of the statue’s sensual curves, was recently loaned to the National Museum of Korea by the Tokyo National Museum. The piece was originally found in Gyeongju, and sold to Japanese businessman Ogura Takenoske. [JoongAng Ilbo]

When the National Museum of Korea recently unveiled five Buddhist treasures from the Unified Silla period on loan from national museums in Japan, one local media outlet dubbed it “the sad return home.”

The treasures - four gilt-bronze statues of Buddha and a Buddhist reliquary featuring an eroticized miniature Buddha known as “the Venus of the East” - are included in the exhibition “Echoes of Life, the Enduring Tradition of Unified Silla Sculpture.” The display has garnered a massive amount of attention, partly because of the emotional fervor over the vast number of cultural properties allegedly looted by the Japanese during its colonial rule of Korea between 1910 and 1945.

“The whole exhibition from beginning to end was organized on a country-to-country cooperative basis,” says Heo Hyeong-uk, the exhibition’s curator.

“But it was done so strictly under a consensus that the focus is purely on public display,” he said, meaning that the issue of repatriation of the relics would be avoided.

The exhibition includes pieces from Unified Silla that are considered the best artistic, scientific and religious reflection of the time. The period was one of unique cultural trends as a result of aggressive trading with other nations such as India, China and countries in Central Asia.

Silla collaborated with Tang China and ended the Three Kingdoms period by defeating Baekje in 660 and Goguryeo in 668.

Historians dub the style of unified Silla as a classic mixture of international style adopted from China’s Tang Dynasty and the traditions of previous Korean kingdoms.

The Buddhist statues of the time convey what is described as “expressive naturalism,” with graceful body contours and sensual poses rarely found in religious works from other periods.

The featured works are not the first Korean treasures loaned back to the country from abroad. But the sentiments of loss and resentment were particularly evident this time around, as the exhibition has taken six decades to come home but will be returned to the Japanese in just three months. Ironically, the show ends on March 1, the date of an independence movement against the Japanese colonial regime in 1919.

The five works were part of the Ogura collection, an extensive and controversial selection of Northeast Asian antiquities gathered by Ogura Takenoske, a late Japanese entrepreneur, during his post as the head of an electronics firm in Korea in the 30s and 40s.

The collection, which includes about 1,100 pieces from Korea, is what many historians describe as the largest personal collection of Korean artifacts ever, including top national treasures like the five Buddhist statues in the current display and a Silla royal crown in gilt bronze. The Ogura collection is so vast and critical that the overseas branch of the Cultural Heritage Administration of Korea conducted an exclusive investigation into it from 1999 to 2002, and published the results in a book.

And yet several instances hint that the scale of the Ogura collection could exceed the current knowledge of many historians.

For example, a large collection of rare antiques were found stored in 60 wooden boxes in the basement of a local military unit in Daegu by an electrician in June 1964.

The place later turned out to be the former residence of Ogura. 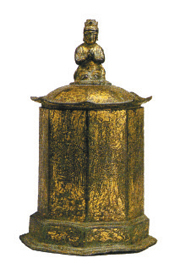 The tension over looted treasures has prevailed for decades between Korea and Japan. Nearly 29,000 Korean artifacts are currently in Japan, and local scholars believe that they were taken by force during the turbulent years leading up to Japan’s colonial regime. One example is the volumes of the Joseon Dynasty’s Uigwe, the royal protocol for local ceremonies, which Japan presented to its Imperial Household in 1922.

Even harsher claims have emerged from Korea over the past year, that Japanese authorities actually commissioned their archeologists to dig up the tombs of Korean queens and kings to loot the treasures buried inside.

In Ogura’s case, the claims of theft have been more descriptive.

“There is evidence to prove that he collaborated with local brokers and thieves who dug into tombs for professional collection,” says Venerable Haemin, a Buddhist monk. Haemin is also an activist with a local civic group, and has worked with North Korean historians in a collective project to push the Japanese to repatriate looted Korean artifacts.

“He even knew and gave the names of the places where these articles were excavated. The case must be re-examined more persistently on a governmental level.”

The Ogura collection has been brought up in past government negotiations. Local authorities officially raised the issue of repatriating national treasures for the first time in history during the Korea-Japan Treaty in 1965.

At the time, Japan declined to discuss the matter, saying the relics belonged to a personal collection. But in 1980, the Ogura collection was donated to the Tokyo National Museum as the entrepreneur’s heirs suffered under heavy inheritance taxes. 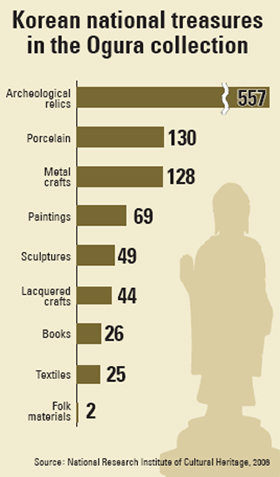 “We’ve been told that the Korean government approached the Japanese authorities again later but that Japan refused to discuss the matter in detail, because although Tokyo National Museum is state funded, it’s an independent agency that makes its own judgments about its collections, without government interference,” says Venerable Haemin.

North Korean historians have also voiced concerns over Japan’s lax attitude to Korean artifacts. They have made bold claims in publications that high-level Japanese authorities, including Ito Hirobumi, the resident-general of Korea during the colonial period, are responsible for blowing open the ceiling of King Gongmin’s tomb in the North’s Kaesong area in 1905, and looting the valuables inside. Whether that is true or not, it is a fact that most of the articles inside the tomb of King Gongmin have been stolen.

The North has also argued that the Tokyo Imperial University unearthed a substantial number of Korean cultural properties in 1925 from Korean tombs in Sokam-ri in Pyongyang, the North Korean capital.

In August, historians and activists from the North and South signed an agreement on their commitment to work together in urging Japan to repatriate looted Korean treasures. In the meeting, the authorities from both sides agreed to touch base regularly, and work to organize three-party talks with Japan.

In the Pyongyang Declaration of 2002, then Japanese Prime Minister Junichiro Koizumi agreed to cooperate in efforts to repatriate the North’s cultural properties.

“It’ll be difficult to find out whether Japan has actually stolen, illegally exported or dug up local tombs for the purpose of expanding their collection,” says Lee Na-young, a researcher of Korean national treasures.

“Records are rarely left [for distribution routes for antiquities], and, especially in academic investigations, researchers will be least interested in finding out the source of the items and their legal standing, because there are scholarly topics to be explored.”