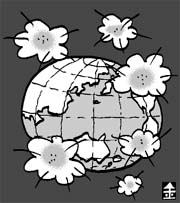 In April 1937, the town of Guernica in Spain was bombed by 40 German planes. Over a two-hour period, 70 percent of the Basque town was burnt by firebombs weighing 250 kilograms (551 pounds) each. About 2,000 people were killed or injured, a third of the population. After hearing about the misery of the bombing, Pablo Picasso painted one of his most famous works of art, “Guernica.”

In the past, our ancestors fought off their enemies using axes during the Stone Age in brutal hand-to-hand combat. Nothing much has changed since then. It’s true that in today’s high-tech campaigns, an artillery officer launches shells from afar at an enemy barely visible to him, and he can see the impact of his efforts through satellite imagery later.

Even though we now have access to the most destructive weapons in human history, humans are just as aggressive as ever before, it seems, which is a huge burden on the future of our race.

The mass development of weapons changed the pattern of warfare and determined which states would win or lose. During the early stages of World War II, German troops waged lightning-fast simultaneous tank and aircraft attacks, a highly effective strategy that saw most of Western Europe fall quickly.

However, the Allies thwarted the Nazi’s onslaught by developing radar systems that won the Battle of Britain in 1940 and created atomic bombs that crushed Japan in 1945.

Now the competition to develop even more powerful weapons appears limitless. A research institute under the U.S. Department of Defense has developed a ray gun that makes people feel as if they are about to catch fire. The technology is a nonlethal way to get enemies to drop their weapons. Korea’s Agency for Defense Development is creating a robot that detects enemy movement using infrared rays and then transmits an image back to base, allowing more precise smart bombing and shooting.

People are even concerned that terrorists may develop biological weapons programs designed to attack certain genes in a target race.

What else? Scientists are even trying to control the track of a typhoon and use it as a weapon.

Recently, eco-friendly hand grenades used for training purposes have been developed in Korea and are scheduled to be exported to the Middle East and Africa. The devices are made from biodegradable plastics.

Obviously, it would be a wiser investment for our race to develop a weapons-free world than to start working on eco-friendly explosives.