The temple of mysteries

The temple of mysteries 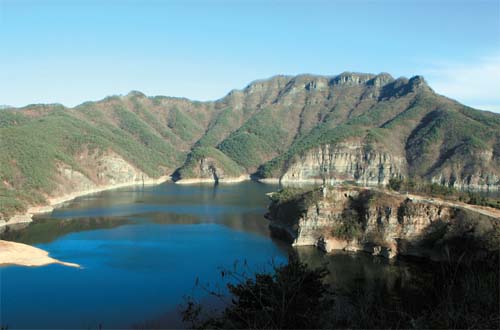 A view of Iseo Cliff. By Park Sang-eon

HWASUN, South Jeolla­ - Winter usually summons a melancholic atmosphere. Whether it’s a barren field, a desiccated forest or dreary sea, a winter landscape is hard to embrace without a hefty dose of literary spirit.

But the pensive nature of winter often doubles the joy of traveling, especially if you’re unaccompanied.

And an ideal location to start a solo trip at this time of year is Hwasun County, which is worth visiting at any time during the calendar, but the colder months are particularly attractive.

Over the years poets who have wound their way to these parts have lauded the scenic cliffs and Buddhist relics found in this county.

One of the most overlooked treasures in Hwasun is Iseo cliff. Like a folding screen, the cliff plummets to the ground as if someone had sliced the rock with a giant carving knife. 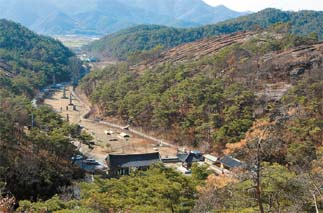 A view of Unju Temple from a nearby mountainside.

The cliff was given its name by Joseon scholar Choi San-du (1483-1536), who compared the site’s beauty to the red cliffs of the Yangtze River, which were immortalized in the poetry of So Dong Pa (1036-1101) during the Song Dynasty.

The fame of the cliff lived on, mentioned by poets and scholars through the ages.

There are four other major cliffs in Hwasun in addition to Iseo, but after the local authorities designated a nearby waterway as a source for drinking water in 1970, the public can no longer walk here.

Views over Iseo were further disrupted when the local government built a dam here in 1982. Today, the only people who can come around these parts are people who lived here before the dam was built.

With the help of the county’s officials, we headed to Iseo along an unpaved road for about 5 kilometers (3.1 miles) with thick forest on each side until we reached a lake. We then turned a corner at the end of the route and encountered an illusionary view. 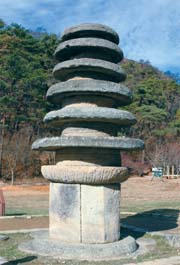 A “rice-cake tower,” a stone monument near the temple’s sanctuary.

A pagoda stands on the edge of part of the cliff that cuts into the lake, creating a fascinating blend of nature and a man-made structure reflected in the crystal-clear water.

About 10 men would climb up and place a bed of straw on top of the cliff. They would then light the straw, place stones in the fire and when they were hot and covered in ash and embers, throw them into the air. Meanwhile, down below, musicians would play traditional instruments.

The ritual was a Buddhist celebration but it was also meant to soothe evil spirits. The event was banned by the Japanese during the colonial period (1910-1945) and resumed after Korea was liberated. 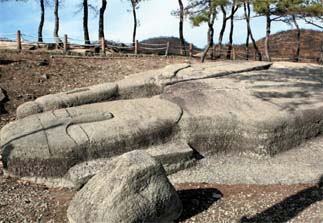 A wabul, or lying Buddha.

Although some parts are off-limits, the public has access to hikes in the area. Mulyeom Cliff, built in front of a pagoda, was named after the pen name of Song Jeong-sun, the county head of Punggi, the neighboring region.

Mulyeom is fairly small compared to neighboring cliffs like Norumok, but the scenery is so beautiful that itinerant poets like Kim Sat-gat would row past on a nearby stream and contemplate the scenery.

Despite its beauty, Hwasun used to be relatively unknown, but all that changed after the publication of “Janggilsan,” a novel by Hwang Seok-young that features Unju Temple as the story’s main setting.

Today, the fame of Hwasun mostly rests on this temple and its famous wabul, or two lying Buddhas.

The temple houses about 80 stone Buddhas and 17 pagodas, but originally Unju housed thousands of Buddhist relics. The place is often referred to as cheonbul cheontap - literally, 1,000 Buddhists statues and a 1,000 pagodas.

Unfortunately, many were damaged or lost over the years. The history of the temple still remains unknown, one of the reasons why the place is often called a “temple of mystery.”

Records show that the temple was built by Monk Doseon during the end of the Silla period (57 B.C.E. to 935) in a single day. The story goes that 1,000 statues and pagodas would mean that a new world had arrived, but just before the 1,000th statue was erected, a cock crew and the builders were so shocked that they fled the temple, ditching this lying Buddha.

At the temple, visitors are usually surprised to see that there are no signboards explaining about the temple’s origins, which is curious given the site’s long history and rich cultural properties.

But look at it this way: The absence of explanation allows more freedom for your imagination.

The shape of each Buddha and tower in Unju Temple varies. Unlike most sacred Korean art, however, these relics are not particularly refined. Art critics and historians say they are messy and poorly made.

In fact, most of the older stone statues have been either lost or damaged over the years. Only the newer ones remain.

The highlight of the temple is a row of 14 Buddha heads carved from rock near a well-manicured garden.

The pagodas are chipped and stained, wounds inflicted over the years, but there is still a sense of refined beauty, unlike some of the other relics here.

One of the most impressive works in the temple compound is a nine-story stone pagoda (National Treasure No. 796), which again breaks the stereotype of a conventional Buddhist relic.

It’s nicknamed “rice cake tower,” because it looks like layers of round cakes piled up from bottom to top.

Walking on, you’ll be led to Chilseong Rock, a giant chunk of stone behind the main compound. This is the best observation post in the area with views over the surrounding landscape.

In the middle of the rock is a hole, through which an adult can fit. Legend has it that Monk Doseon, who built the temple, oversaw construction from here.

In April, a mountain fire erupted near Unju Temple and burned down buildings in nearby villages. Luckily the temple was safe.

Perhaps it was the spirit of Monk Doseon that saved the temple from danger.

But that, too, is up to the visitors to imagine.

To get to Hwasun from Seoul, take an express bus to Gwangju. The trip takes four and half hours. From Gwangju, take bus No. 318 or No. 218 to Unju Temple. The trip takes an hour and 20 minutes.