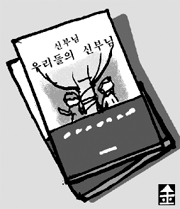 In Camillo’s parish, a small village in the Po River Valley, the stubborn priest continually has run-ins with the local communist mayor Peppone. These two Tom and Jerry, cartoon-like characters and their ideological disputes are depicted with warm humor. When Camillo rings all his church bells so as to disrupt a gathering of members of a communist group, Peppone retaliates by scattering inappropriate toys in front of the parsonage. Their childish bickering sometimes even spills over into fist fights.

However, their tempestuous relationship does have its lighter moments. One day, Peppone comes to confession and says, “One night two months ago, I beat you with a stick.” Camillo forgives the sin but still harbors some animosity. After asking for God’s understanding, he kicks the mayor. A smile flashes across their faces as Peppone says, “Now I feel like a load’s been taken off my chest.”

Guareschi started writing the Don Camillo series in 1946. After a three-year imprisonment in World War II, he returned home to find an Italy extremely divided in an intense conflict between rightists and leftists. He founded a centrist satirical weekly and criticized both the Democrazia Cristiana party and the Communists. Charged with libel, he was put in prison for a year and died from a heart attack.

Guareschi, who led a difficult life, hoped that his novels would help Italians forget their problems and smile, even if for a short time. He also suggested a solution to resolve conflicts, saying that we should reconcile and cure the wounds caused by ideological conflicts with a heartfelt belief that humans are good.

Joseph Grenny, who wrote the book “Crucial Confrontations” drawing on his 30 year’s experience as a consultant of entrepreneurial communication, points out that a failure to communicate results from prejudices against others that serve as barriers. Tim Ursiny says in his book “The Coward’s Guide to Conflict” that fighting or running away are wrong. He insists that we should try and see eye to eye and make an effort to look at others’ opinions rather than their attitude.

This year will be tough, with persistent confrontations and conflicts lurking around every corner of politics and society. Even if we disagree, we should not assume an aggressive stance against someone’s attitude, but look at his or her real intention and logic.