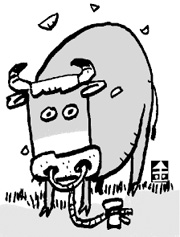 We are peaceful and simple-minded creatures destined to sacrifice ourselves for people throughout our lifetime. We eye the goings-on of the human world with little interest. We perform our duties in silence and without complaint. That’s our nature.

But I raise my voice today because the passing events are depressing and unsettling even to our color-blind eyes. Last year was particularly horrible. We were victims of defamation, associated with our distant families across the Atlantic. We were labeled as “mad” and blamed for causing holes in the brain when we were eaten. Of course scientific research later proved such allegations were groundless.

Toward the end of the year we saw economic turbulence on a global scale. We have learned that human greed was behind this downfall. This year doesn’t look that promising either with everyone scurrying about in search of a speedy solution to the crisis. Doing things expeditiously isn’t always the right way.

We have an old folktale about a top minister during the times of King Sejong in the Joseon Dynasty. Once when traveling back to his hometown in Onyang, a village sheriff came out to greet him and his coterie. But all the sheriff saw coming his way was a leisurely moving cow with an old man in tatty clothes. The sheriff’s men scolded the old man, “How dare you pass the sheriff without paying respect!” they demanded. They soon learned that the shabby-looking old man was actually the top government minister they had been waiting to respectfully greet. The minister forsook the usual grand horse-carriage and instead chose to travel alone on a cow. The minister had been living out his teacher’s wisdom that “we ride a cow to go slow.”

Other wise Joseon-era officials enjoyed traveling on cows’ backs, discovering the aesthetics of slowness. In slow steps, we can leisurely watch and study the surroundings and occurrences we pass.

It’s our year according to the lunar zodiac, and leaders across society have quoted sayings that epitomize our characters in their New Year’s speeches. “The cow that walks on the stone path” refers to a cow’s steady and hardworking nature. “Walk a thousand miles at cow’s pace” conveys accomplishing goals with cow’s perseverance. Having “tiger’s eyes and a cow’s pace” is cited when wisdom and prudence are needed in decision-making.

They are all wise sayings but what are words without actions? I usually sit idly by and watch, but I thought it would be good to hear some wisdom directly from the cow’s mouth. Happy Moo Year to you all.