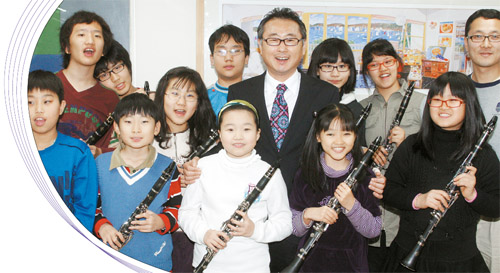 Clarinetists from Resound Ensemble, all of whom have hearing problems, pose with Lim Cheon-bok, who founded the group in December 2004. [JoongAng Sunday]

One Friday evening at the headquarters of Kwangwoo MeDix, a distributor of medical equipment and supplies, children armed with clarinets began showing up.

Under a teacher’s direction, the children filled the room with the sound of their clarinets. Some players were out of tune at times, but the organizers are used to these kinds of problems. All the kids in the room are hearing impaired to varying degrees and wear cochlear implants that, unlike hearing aids, stimulate auditory nerves to improve hearing.

“Both of my daughters were born deaf,” said Jeong Hye-jin, 40, who brings her 15-year-old and 12-year-old daughters to practice every Friday. “But after the [cochlear] implants, they are able to communicate with me. They started learning to play the clarinet here two years ago. I think their friends have begun to view them differently.” Seeing her daughters play music with others and develop an ear for harmony and melody is a dream come true, Jeong said. 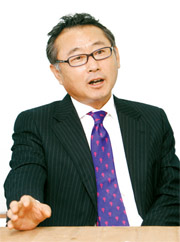 Lim Cheon-bok, set up the clarinet orchestra to help kids with hearing difficulties learn about music.

Jeong’s daughters are members of Resound Ensemble, a group of 20 or so young musicians that have been playing together since December 2004. So far the troupe has given four regular concerts, the last being in November last year at Gangnam District Residents Hall, southern Seoul.

As the practice session wound down, Lim Cheon-bok, the CEO of Kwangwoo MeDix, showed up with boxes of pizza.

“Hi, your muffler doesn’t really suit you,” said some of the children, teasing Lim.

“Oh, yeah? Well, I’ll have to wear a different one next time,” Lim said before laughing.

Kwangwoo MeDix, which Lim set up in 1988, specializes in distributing medical equipment and supplies specifically related to ear, nose and throat diseases. About 10 years ago, he got into the hearing-aid business, winning an exclusive distribution contract for hearing aids from Danish-based GN Resound several years later. In 2005, GN Resound and Lim opened GN Resound Korea. Lim is the CEO.

“About 10 years ago, a distraught woman with hearing problems approached me begging for a cheap hearing aid. Her husband had left her, but she couldn’t find a job to support her kids because of her ear trouble. I gave her a hearing aid for free and that was the beginning of it all.”

In 2000, he financed two sisters with hearing disabilities to get cochlear implants and speech therapy. Their grandmother was supporting the two girls as well as their parents. The implants are surgically placed in the ear, whereas hearing aids, which amplify sound, are attached.

“After the surgery, she grabbed my hands, and just cried and cried,” Lim said.

Even if they have this kind of surgical treatment, people born deaf or with a reduced capacity to hear have to practice listening and speaking on a regular basis. To enjoy music is even harder.

“I heard that the clarinet is the best instrument for hearing-impaired children as it has a clear sound and is relatively easy to learn,” Lim said. He himself learned to play the instrument for eight months before he began holding lessons for the children.

Even though it’s a relatively young orchestra, the Resound Ensemble is always busy. Besides annual concerts and weekly practice, the clarinetists join free camps in the summer and winter breaks and take part in charity events to raise funds for and awareness about children with hearing disabilities.

Their efforts have paid off. Soree119, a sponsors’ society formed in 2004 that helps raise money for kids in need, became an incorporated body in 2007, paving the way for more, high-quality support for the children. Soree119 has so far financed cochlear implants and speech therapy for some 25 children. The process would have cost each child’s family some 15 million won ($11,406).

Lim strongly believes in sharing and helping. He says the more he gives, the richer he becomes, and that the pearls of wisdom he’s acquired over the years are most important in his life.

His name Cheon-bok literally means “blessing from the heavens” in Korean. “My mother gave birth to me when she was 45. As a latecomer in my household, I was very much loved,” Lim said.

But life was not easy for Lim when he was growing up. He was 5 when his father passed away and soon afterwards, his mother became paralyzed. He was forced to live with relatives but unfortunately he always felt like an unwelcome guest.

“I didn’t get lunch most days so I stayed in the classroom during breaks and got food from my classmates’ lunch boxes,” he said.

Lim admitted there were times when he became resentful, wondering why his life was so hard. Out of frustration, he sometimes got himself into fights, but he always managed to find his way back, remembering how good his parents had been to him when was young.

He graduated from university and became a salesman at a company that distributed medical equipment and supplies. But he didn’t do very well, largely because of his poor verbal and social skills.

“I was determined not to fail, so I memorized the names, serial numbers and other details of hundreds of items of medical equipment. Then I visited doctor after doctor and my customer base soon began to grow,” he said.

But just when he thought he was making real headway, his company went bust. Unemployed, he decided to go it alone. Starting out with some desk space in the office of an acquaintance, he distributed medical equipment and supplies for ear, nose and throat illnesses.

With help from his previous clients, his business grew, but just as he was branching out into the hearing aid business he met another obstacle head on: the Asian financial crisis in 1997.

“I called to cancel the shipment [of hearing aids], but my partner said they had already shipped the products. I guess I began the hearing aid business in the worst-possible circumstances,” Lim said.

Undeterred, Lim tried to turn the crisis into opportunity.

His company expanded from 17 to 87 employees and sales rose significantly. Last May, his business was officially recognized, getting an honor from the Prime Minister’s Office.

Three months later he got another from the Small and Medium Business Administration.

“It’s not important how much you have or how little you have. Even if you leave a large sum of money to your family, your kids could use it up pretty quickly,” he said.

“I don’t intend to leave my children anything. I’m going to use it all, giving it to others and spreading joy and happiness. That’s what life’s all about, I think.”