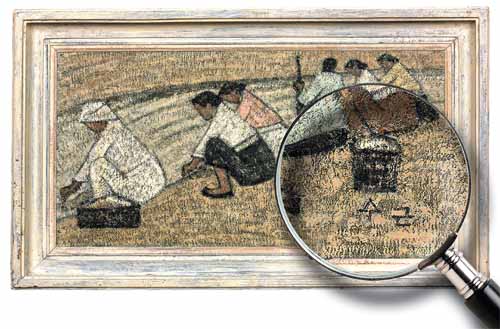 The authenticity of “Washing Place” by the late painter Park Soo-keun has been called into doubt. [JoongAng Ilbo]

The work of the artist Park Soo-keun (1914-1965) remains highly popular in the local art scene. But one painting in particular has caught the imagination of the public.

Tongues have not stopped wagging ever since Artrade, a bimonthly art magazine, suggested last January that “Washing Place,” the most expensive painting ever sold at auction in Korea, might be a forgery and not the work of Park at all.

The ferocity of the claims and counter-claims eventually dragged in the lawyers. Seoul Auction, which sold the oil painting for 4.5 billion won ($33.3 million) in 2007, sued the magazine for 3 billion won.

In defiance, the magazine filed its own claim against auctioneers the following year.

At complete loggerheads, both sides agreed to let the Seoul Central District Court undertake its own authentication process to settle the dispute. 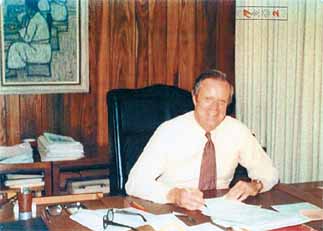 A photograph of John Ricks, the American collector who said Park Soo-keun gave him the painting “Washing Place” as a gift. Some art experts say this photograph might have been doctored using Photoshop.[JoongAng Ilbo]

Last Monday, the court arranged for samples of the painting to be whisked off for analysis at court-appointed appraisers at various labs and centers in the country.

Kim Joo-sam, a researcher at the Leeum Museum in Seoul, will put forward the position taken by Seoul Auction, and Choi Myung-yoon, a professor at Myongji University and director of the International Art and Science Institute, will argue for Artrade during the legal proceedings.

The results of the examinations will be announced next Wednesday.

The details of the dispute are simple enough. While the magazine insists the painting in question is the work of another artist, Seoul Auction argues that the work was bought from an American collector who said Park gave him the painting 50 years ago. 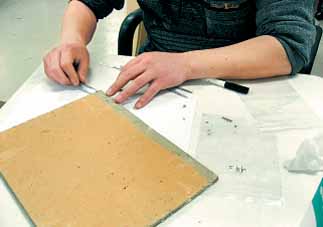 Medium-density fiberboard didn’t exist when “Washing Place” was painted in the 1950s.

To back its claim, the auctioneers previously asked art experts last July to evaluate the authenticity of the painting. They asked the art experts to compare the colors used in Washing Place with some of Park’s other works, namely “A Tree and Two Women” and “Way Back Home.” They concluded that the chemical composition of the colors used in Washing Place are the same as those in his other works.

You’d think that the matter would have been concluded at that point, given the status of the art experts involved in the authentication process. But Seoul Auction didn’t count on Choi of Myongji University stepping into the fray. He has since strongly criticized the entire appraisal conducted by the three groups of experts that Seoul Auction contacted.

“At first glance, the pigment seems the same since the elements overlap each other,” he said. “But when you examine the painting more closely, you can see that different colors are actually used.”

For example, Choi argues, the white used in Washing Place is zinc white, a color made from iron and calcium, which is much clearer in tone.

In other oil works by Park, though, the artist used a mix of titanium white, lead white and zinc white to create his white colors and tones.

Choi believes this is irrefutable evidence that Washing Place is the work of another artist. If Park painted Washing Place, the chemical composition of the white color should be the same mix of titanium, lead and zinc.

The Myongji professor then threw another spanner in the works. He said that Park’s paintings used as points of comparison by Seoul Auction in its own authentication process might be fakes as well.

If the professor’s assertions are right, the whole process of authentication initiated by the Seoul court is a pointless exercise.

With so much uncertainty in the air, the court last Monday outlined a three-stage process for authenticating the work in question, Washing Place.

It will first take another look at the issue of the chemical composition of the colors and also look at a particular technique Park is noted for: creating multiple layers of texture. 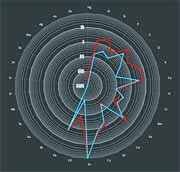 An analysis of the painting’s colors. [JoongAng Ilbo]

According to a thesis published by Ho-am Art Museum in Yongin, Gyeonggi, in 1999, Park used a brush and knife to create these on the canvas. The court said it had arranged for experts to view the painting through a high-powered microscope.

If the painting is by Park, experts say, there should be between six and nine layers of paint making up the textured layers.

The second authentication method the court plans to exploit is to compare the canvases of Washing Place with A Tree and Two Women. The two paintings were created during the same period of the artist’s career.

But it won’t be easy, Choi explains.

“Last January, I appraised [A Tree and Two Women] and found the painting’s canvas was made of a wooden product combined with a kind of wax or medium-density fiberboard,” he said.

MDF is an engineered wood product that didn’t exist in the 1950s, when A Tree and Two Women was painted. It didn’t become widely available in Korea until the 1980s.

If this is true, the painting is clearly a fake, and if the canvas of Washing Place is also made from MDF, then doubts about its authenticity would stand up in court.

However, Choi Yun-seok from Seoul Auction denounced Choi’s claims. “Many art experts have told us that the canvas for Washing Place is paper,” he said.

To put an end to the clamor, the Seoul court said it will request the National Institute of Scientific Investigation or the Korea Forensic Research Institute to examine the canvas material using an electronic microscope as part of its legal proceedings.

The court has a third option to turn to: an examination of a photograph.

When John Ricks, 82, an American who is said to have collected the artwork 50 years ago, was working at an American heavy industries company half a century ago in Seoul, he used to buy Park painting tools from the West.

In return, the late artist allegedly presented five paintings to Ricks as a gift including Washing Place and “A Woman at the Market.”

Seoul Auction has submitted to the Seoul court a photograph of Ricks sitting in his office with a painting of A Woman at the Market hung behind him.

“If A Woman in the Market in the picture is real, there is a higher possibility that Washing Place is also real,” said a researcher from Seoul Auction, who asked to remain anonymous.

The Myongji professor is adamant, though, that the photograph will only serve to strengthen his stance.

“When you compare the front and side of the painting in the photograph, it seems to me that someone was using Photoshop,” Choi said.

To assess the authenticity of the painting in Ricks’ photograph, the court has asked the document inspection team at the prosecutors’ office and the visual analysis team at the National Institute of Scientific Investigation to take a close look.