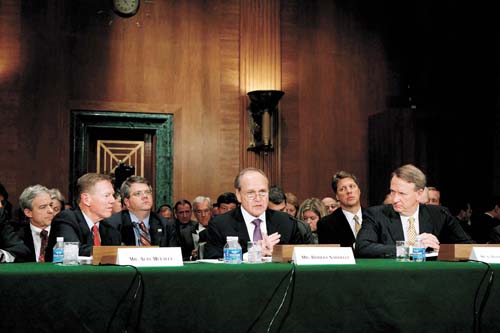 As Koreans watch the drama unfolding in the United States, in which the fate of the three U.S. automakers hangs in the balance, there is one point that should not be missed. The Korea bashing is growing stronger.

The fall of the Big Three - GM, Ford and Chrysler - was no doubt the result of the fierce competition with foreign automobiles, especially those from Japan. Toyota, the symbol of the Japanese auto industry, had overtaken GM, the company that has ranked first in the world for the past 77 years, to become the world’s biggest automaker in 2007. The market share of Japanese automobiles in the North American market now stands at more than 35 percent. Yet, there is no resentment to be heard towards Japanese automobiles from American newspapers or politicians. Instead, such companies are receiving praise for creating jobs at a time when unemployment is a growing problem.

The reaction by Americans was far from this in the past. In the early 1980s, when the U.S. trade deficit with Japan started to widen dramatically, anti-Japanese sentiment began raising its ugly head in many parts of U.S. society. People lamented that Japanese automobiles were invading the United States. American pride took a blow as Japanese companies that were raking in U.S. dollars purchased Rockefeller Center in New York, a symbol of the U.S. financial world.

As a result, ugly incidents such as people taking a hammer to Japanese cars were seen all over the United States.

“Japan-bashing” became a familiar term in American newspapers at the time. The low point of such Japan-bashing came with the killing of Vincent Chin in 1982. A Chrysler employee and an unemployed autoworker in Detroit, where the Big Three automakers are headquartered, mistook Vincent Chin, a Chinese-American, for a Japanese, and beat him to death with a baseball bat.

Nowadays, some 20 years later, the violent Japan-bashing has disappeared, and it is almost as if it never happened. Instead, Korea is now being singled out as the main culprit behind the fall of the U.S. auto triumvirate, and is becoming the victim of bashing.

Barack Obama, who will become the president of the United States next week, attacked Korean auto exports many times during the course of his presidential campaign. In relation to the trade imbalance in automobiles between the two countries, he complained, “Hundreds of thousands of Korean cars are coming into the country, but the United States is selling only 4,000 to 5,000 cars to Korea. This is not free trade.”

Even Charles Rangel, a leading Korea-friendly member of the U.S. House of Representatives and chairman of the House Committee on Ways and Means, mentioned Korean automobiles as a factor that is blocking the ratification of the Korea-U.S. free trade agreement. At the end of last year, the former president of United Auto Workers, Ron Gettelfinger, attending a Senate hearing, also pointed out the imbalance in automobile trade between Korea and the U.S. as a serious problem.

It also does a lot of local manufacturing. Some 63 percent of Japanese cars sold in the United States are made locally. That number stands at around 47 percent for Hyundai’s Sonata and Santa Fe, its main export models which are manufactured in Alabama.

So why has the blame for the fall of the Big Three shifted from Japanese cars to Korean ones?

I asked American people around me and was told, “People think Toyota and Honda are U.S. automobiles.”

After Toyota endured the period of Japan- bashing, it spent the last 20 years or so putting all its efforts into establishing a pro-American corporate image in the U.S. It strategically positioned its manufacturing facilities at 13 different locations around North America and employed thousands of locals at each factory. Naturally, the senators and congressmen from these states became friendly forces in Washington.

It also staged active lobbying in the U.S. Congress. There are reported to be 17 Toyota lobbyists residing in Washington. It has also donated millions of dollars to support eye-catching local campaigns, such as one promoting literacy among Hispanic Americans. It is clear that decades of persistent lobbying by Japanese companies has played a significant role in quelling any lingering anti-Japanese sentiment.

There is also a timely aspect to the Korea-bashing. The political and financial sectors and the autoworkers’ unions in the U.S. are launching attacks on Korean cars right before the ratification of the Korea-U.S. free trade agreement.

At a time when the trade imbalance in automobiles has emerged as an obstacle to the ratification of the Korea-U.S. FTA, we should learn from the efforts our Japanese neighbors made to overcome Japan-bashing.


*The writer is the New York correspondent of the JoongAng Ilbo.