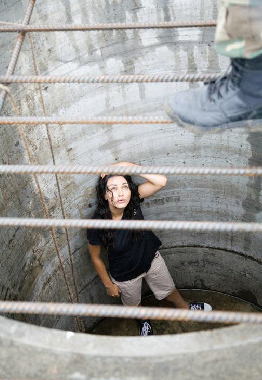 From the outset, director Christian Duguay makes it clear that “Boot Camp” is based on true events.

Sophie (Mila Kunis) doesn’t get along with her stepfather, Karl (Serge Houde). She is pretty much a normal teenager, except for her stormy relationship with Karl, whom she resents because her mother married him not long after her father died.

She feels that she has barely come to terms with her father’s sudden death. This makes Sophie resent Karl, and she insults him in front of some guests.

As the row between Karl and Sophie gets worse, Karl packs her off to A.S.A.P., a rehabilitation program on a remote island of Fiji. Sophie’s mother (Grace Bauer), consents to this, hoping it will bring peace to their home.

Boot camps are where parents send troubled teens for corrective behavior training. There are currently thousands of similar “tough love” facilities around the world, with tens of thousands of children.

The trouble is that there is virtually no governmental regulation or oversight. And this movie illustrates how this lack of regulation means kids are abused and brainwashed, instead of rehabilitated.

At boot camp, Sophie is bullied by other inmates. This is part of an approved program designed by the camp’s founder, Dr. Norman Hail (Peter Stormare).

What’s worse, the camp’s chief guard, rather than being a protector, is a leading perpetrator of bullying and rape of the teenage girls.

The kids learn that in order to get themselves out of there and back home, they must be cruel to each other. They also discover that making sexual deals is the way to survive.

Sophie’s boyfriend Ben (Gregory Smith) tries to find her whereabouts, and gets himself packed off to the same boot camp on purpose in order to rescue her.

Since the beginning of the tough-love rehabilitation movement in the 1970s, hundreds of thousands of kids have been in and out of boot camp.

But in this film, Duguay asks, “Would parents send their child to such places if they knew the truth?” Parents believe that they are sending their kids to be rehabilitated in a beautiful natural environment, but to date, there have been over 40 reported deaths in the camps. It’s anyone’s guess how many lives have been irreparably damaged, says Duguay.

This film is classified as a thriller, but it felt more like a documentary. While the message was interesting and shocking, the film didn’t have any suspense or action scenes.

Still, I loved Duguay’s message that children should never be abused under the pretext of parental love.