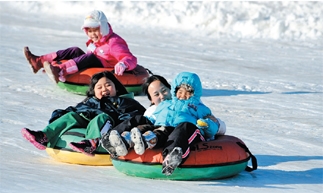 For Seoulites, snow during the winter months is not a common sight anymore. Even when we do get snow, it’s not often that we see it settle.

One place in Korea where there’s usually an abundance of snow is Gangwon Province. While many head to this mountainous region in the east of the country for the ski slopes, Gangwon offers plenty of other winter activities.

If you’re not familiar with Gangwon and you’re not sure where to start your winter safari, you’ll do yourself a favor by making Pyeongchang County your first stop.

Nestled in the pockets of this county, the third largest in Korea, are a stack of villages where city dwellers can indulge in a range of winter sports.

But be warned. Korean streets often lack adequate signs and it’s sometimes hard to find your destination, and Daegwallyeong Snow Village Chahang, (033) 333-3301, is no exception.

To get there, drive in the direction of Daegwallyeong along Youngdong Freeway and exit at Hwenggae. Upon reaching the Chahang intersection, take a left and drive about 200 meters (656 feet). Then make another right and drive for about four kilometers.

It sounds complicated, right? But, as with skiing, the secret to finding the village is never to give up. And once you get there, any frustrations resulting from getting lost down dead-ends will evaporate when you see the pure-white snow covering the branches of the trees and the roofs of the village houses.

The snow village was designated last December by the Rural Development Administration as one of the five most beautiful winter villages in Korea.

It’s a unique landscape. To the north a mountain range is visible and nearby the blades of wind power generators rotating cut silently through the frosty air.

But it’s not all peace and quiet. The cries of more than 100 visitors fill the air as they sled down icy slopes on rubber tubes at the Sanchon resort that opened in late December.

The sledding course is zigzag in design, adding to the thrill. Rather than shoot straight down, sledders swerve and careen their way to the bottom of the hill in a rush of adrenaline.

In addition to rubber tube sledding, visitors to the resort, built inside the Snow Village, can have a go at a village folk game called the Mount Hwangbyung Hunting Game. 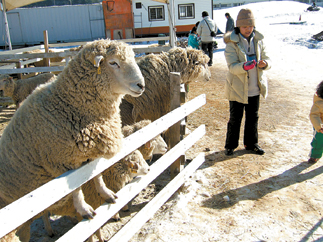 Tourists at Baram Village can feed the sheep at a farm there, and admire their woolly fleeces.

The game consists of walking to the top of a hill on the grounds in the resort and wearing traditional snowshoes. When you get to the top, you have to look for a wild pig, which is roaming an enclosed area.

When you see the pig, you have to shout, “I’m going after the pig!” and then motion you are stabbing the wild boar with an imaginary spear.

The other people in your group can also have a go at pretending to stab the pig with their imaginary spears.

After that, pig well skewered, you strap on a pair of traditional skis and zip back down the hill.

Adjacent to the hill is an open area where visitors can try dogsledding, being pulled through the snow by a pack of huskies. Snow rafting is also popular: You sit in a rubber boat and get pulled along by a four-wheel all-terrain vehicle.

If you’re not that keen on dogs or think snow rafting will be too noisy, you can saddle up and go horse riding through the snow, but if even that sounds too adventurous, there are plenty of slopes to just ski or snowboard down.

There’s another snow village nearby called Surae Village, (033) 336-3500, where the regional delicacy hwangtae, dried pollack, is a speciality.

Visitors can try their hand at building the wooden racks that the pollack hangs from to dry and later cap off the day with grilling some of the fish.

Yuiyaji Baram Village, (033) 336-9812, which is close by, offers pretty much the same kind of activities. One unique activity here is making cheese and strawberry jam and feeding sheep.

Other than snow, mountainous Pyeongchang is also known for its trout.

There’s an annual festival here called the Pyeongchang Trout Festival, (033) 336-4000, which kicked off on Jan. 3 at Odae Stream in nearby Jinbu. About 3,000 visitors packed into the area on the first day of the festival. 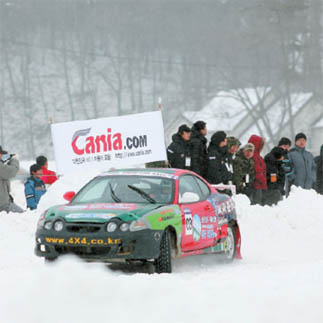 A modified Tiburon skids through the snow at a car rally.

The festival will continue until Feb. 3 but the organizers say the size of the ice fishing event has doubled this year and other activities will continue to be run for visitors to enjoy until mid February.

Take note that if you’re looking for an authentic ice fishing experience in a serene atmosphere, this festival isn’t for you. The stream is packed with fishers, who use either a rod and line or have a bash at using their hands to rip a hapless fish out of the freezing water.

The good thing about ice fishing at the festival is that visitors are almost guaranteed a catch. The organizers rig the event to make sure there are lots of happy punters milling around.

In order to prevent trout from gathering on one side of river, the organizers say they have installed underwater nets for even distribution of the stock.

While reeling in a sizeable trout is a great way to spend an afternoon outdoors, the highlight of the festival this year may well be the “Happy700 Snow Car Race.”

A car rally race in the snow will be held at the center of the festival grounds tomorrow and Sunday. It’s organized by the Korea Rally Association and the festival organizers, and it’s the first race of the 2009 Korea Rally season.

There will be around 150 cars spinning around in the snow.

Some will be four-wheel drives but other will be regular motors, so expect to see a lot of cars sliding all over the 750-meter-long track.