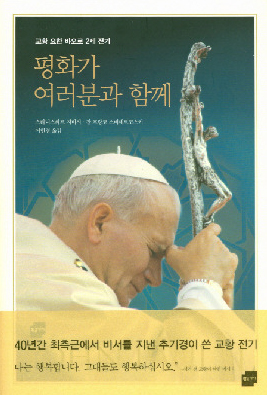 In a “A Life with Karol,” which was published in March 2008 and recently translated into Korean, Dziwisz portrays the late pope as a formidable world leader, a man whom he knew for almost 40 years.

Don’t expect any criticisms of John Paul II; this is a hagiography written by a man who shared John Paul II’s love of Catholicism.

The cardinal had a unique vantage point from which to observe his fellow seminarian from Krakow, Poland.

He was next to the pope when a Turkish gunman tried to assassinate him in St. Peter’s Square in 1981 and he was there to capture the late pope’s reaction to news of the events on 9/11.

He also recounts how the pope would occasionally slip out of the confines of the Vatican in disguise and go skiing with Dziwisz at his side.

The cardinal was clearly heartbroken, like millions of Catholics around the world, when after months of failing health John Paul II passed away.

“I had accompanied him for almost forty years: twelve in Krakow and then twenty-seven in Rome. I was always with him, always at his side. Now, in the moment of death, he’d gone on alone ... And now? Who is accompanying him on the other side?” the cardinal writes.

The book is written in the form of a conversation between the cardinal and the journalist Gianfranco Svidercoschi, who wrote about the Vatican for almost 50 years.