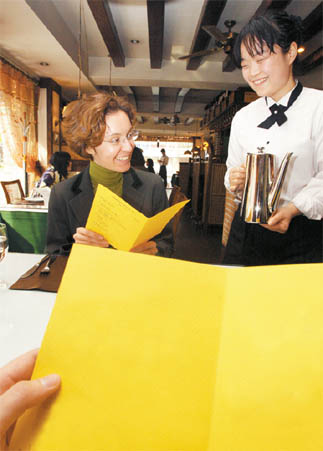 Roshni Lal, an American expat who works as a career counselor in Seoul, had a perplexing moment at a recent meal in a restaurant serving Western food.

Her friend was trying to explain to the Korean wait staff that they wanted pickles to go with the sandwich. The server had no idea what the friend was saying.

She repeated the word “pickle” three times, but was met with an innocent frown each time. Finally, a Korean-American in the group jumped in and announced “pickel,” the way Koreans normally pronounce an English word without rolling their tongue. The wait staff finally nodded.

“It’s often the case that when dining out at Korean restaurants without my Korean-speaking friends, I have to just point at the menu or point at the existing dishes on the table,” says Lal, who adds that such behavior makes her feel as though she’s being very rude. 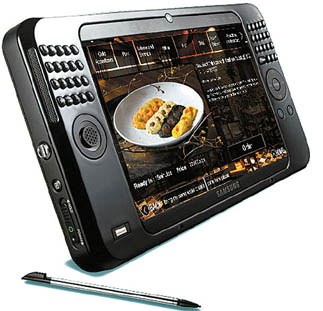 The menu console is on trial in five traditional Korean restaurants in Seoul.

“I’m never quite sure just how much food is going to come out or whether it will be too much, not enough, or unrecognizable.”

Similar anecdotes abound among travelers faced with situations in restaurants here as they stumble over a word to describe the dish they want to order.

The irony is that a lot of tourists from other parts of Asia come here specifically to sample the food. In a recent survey by the Korea National Tourism Organization, almost 14 percent of visitors said food motivated them to come here. The main reason tourists come to Korea remains shopping, with a 15.9 percent share. Over half the Japanese tourists to Korea (58.5 percent) cited food as the biggest reason for visiting.

The Seoul city government has tried in the past to ease dining inconveniences for tourists and foreign residents at restaurants in Seoul, but non-Korean speakers continue to experience many challenges communicating with wait staff in restaurants. The lack of English menus is a common complaint, especially from business travelers, raised at past Seoul Town meetings for foreign residents and government officials.

“It’s a situation you run into in any foreign country, and Seoul is no more difficult than other cities in the absence of English services,” says Alan Timblick, head of the Seoul Global Center. “It’s difficult to guess what you’re going to get. That’s why many foreigners don’t go to Korean restaurants unless they’re accompanied by a Korean speaker.”

In the past months, district offices in Seoul have tried to resolve this issue in a number of ways. Gangnam District has devised standardized descriptions for Korean, Japanese and Chinese dishes, which will be printed on menus and distributed to select restaurants in the area in English, Chinese and Japanese.

Officials have identified 26 businesses in Seocho District where wait staff can communicate in languages other than Korean, including French and Italian restaurants in Seorae Village where there is a high concentration of French residents. In the windows of restaurants where staff speak English hang signs saying “English spoken here.”

Additionally, Seocho District officials have compiled an English training manual containing phrases commonly used in hotels and restaurants here. The book presents dialogues on situations such as guiding a guest to a table to taking actual orders.

“There are 6,000 foreigners living in our district,” says Park Seong-jung, head of Seocho District council. “It would be great if non-Korean speakers could mingle better with the local community. It would make our district a solid and more competitive global neighborhood.”

Last month, the marketing people at Seoul city government started to trial an electronic device called a menu console at five traditional Korean restaurants last month. This device offers a detailed description of the menu complete with the price and cooking time for each dish.

A touch screen pad on the console, which was designed by the Seoul Tourism Organization, provides multilingual services in English, Chinese and Japanese for each dish with details including the dish’s history, ingredients and a brief description of how the meal is prepared.

Hit pyeonsu, for instance, and you’ll discover, if you didn’t know before, that it’s a traditional vegetable dumpling typically eaten in the summer. The device further reveals the ingredients to be flour, salt, water, zucchini, shiitake mushrooms, bean sprouts and beef. The device also tells us that bulgogi is slices of beef marinated in pear, rice wine and sugar for even more tenderized meat.

The gadget also functions as a communicator between wait staff and customers. Users can send their order to the cashier and make simple requests by pressing buttons for phrases like “bring me water” or “please come here.”

“It [the device] makes sense,” says Lal who was trying it out at a recent lunch at Durae, one of the five restaurants testing the device. “If someone told me a restaurant had this device, I would go.”

Others suggest the device could say which is the most popular dish at the restaurant, how to enjoy the dish and comments on the spice level of the dish.

Some, though, think such an electronic device is redundant.

“It’s expensive and inefficient,” says Andrew Salmon, the co-author of Seoul Food Finder, a guide to eating in the capital. “How many restaurants could afford to provide such a device? Why not just write the information on a menu or put up an English version of the Korean food guide online?”

In fact, many foreigners seem to be more concerned about the content of the English menu than the additional services the government provides. Many feel the English translations in most Korean restaurants are inadequate and fail to explain unfamiliar food.

In one incident, the English Web site of the Korea National Tourism Organization attracted voracious criticism after it identified a roast duck as “sulfur duck” without any further explanation.

The dish originally comes from traditional Korean cuisine. The duck is fed with medicinal herbs and sulfur, an ingredient that supposedly strengthens the texture of the duck meat and enhances the medicinal factor. In Oriental medicine, ducks are known for having a metabolic system capable of detoxifying sulfur.

More recently, a menu from a Korean restaurant, which looked like it had been translated from English to Korean through an online translating tool, was uploaded on an English humor site.

In the menu, gomtang, which is a simmered beef stew, was translated as a “bear stew.” Gom means bear in Korean.

Food experts point out that a menu using proper English with simple descriptions of the dish needs to be written by someone with insight on Korean food in order to promote local cuisine.

The English-language Korean Food Guide, a government-funded project compiled by 20 food specialists, is a standard guide for Korean food and has been generally well received, but it is not widely available, and it is unlikely that many foreigners in Korea refer to it.

Lal advises foreigners here to keep trying and not be afraid of the risks of miscommunication.

“There are also pleasant surprises,” she says, “like the variety of side dishes that accompany each meal, which tend to be my favorite. You can ask for a refill of the side dishes as many times as you want, free of charge. It’s something I would have never known even if I’d been left alone with my own version of dining out sign language.”