Valkyrie rides into town with Cruise in control

Valkyrie rides into town with Cruise in control


U.S. film star Tom Cruise is no stranger to controversy, and he lived up to his billing at a recent press conference to promote his latest movie “Valkyrie,” about a botched assassination plot against a certain German political leader.

“I’ve always wondered why someone didn’t stand up and try to stop him,” Cruise admitted. 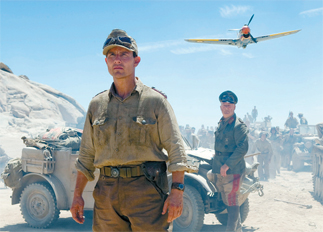 Gimpo Airport was packed last Friday afternoon with dozens of fans clamoring to see Cruise, in town for three days to promote his film.

Cruise certainly knows his way around Korea. This was his fourth trip here, though he hasn’t been back for eight years.

This time, it’s Valkyrie, a film that gets its Asia release in Korea tomorrow.

This historical thriller is based on real events, a failed plot called Operation Valkyrie to remove Hitler from power on July 20, 1944.

The movie project began in Berlin with Oscar-winning screenwriter Christopher McQuarrie, who wrote the 1994 film “The Usual Suspects.”

In early 2002, McQuarrie visited Berlin to scout locations for other upcoming works. On the last day of his tour, his guide took the group to the Bendlerblock building where von Stauffenberg and other German conspirators were executed.

McQuarrie thought the story would make great material for a movie.

He shared the story idea with director Bryan Singer, with whom he worked on The Usual Suspects.

Singer immediately took the script to a production company and cameras started rolling soon after.

“I’ve always had a fascination for World War II,” Singer said at a press conference last Sunday at the Grand Hyatt Seoul in central Seoul.

McQuarrie and Cruise were also present at the conference.

“The script McQuarrie proposed was fantastic.”

As part of the filmmaking, the three Hollywood figures visited several historic locations in Germany over eight months, and listened to in-depth lectures on the history involved.

“It [working on the history film] was a powerful experience for all of us,” Cruise said, adding that he’s always been interested in history and found the script incredibly interesting.

While adding that he is first and foremost a movie fan, he thinks carefully about how to entertain the audience and himself. “Though the story is set way back in WWII, the theme is timeless and ageless,” Cruise pointed out.

The film is important, the moviemakers agreed, because it shows there were Germans who tried to stop Hitler and that not everyone, including not all Nazis, wanted the Holocaust.

Meanwhile, Singer, whose father was a veteran of the Korean War, said that “Korea has an extraordinary rising market for film, - both international and Korean films.”

Singer said bringing together Hollywood and Korean movie figures was a prelude to further filmmaking collaborations.

“In every society and culture, we do everything to support them [artists]. As artists, we speak a common language,” Singer said.