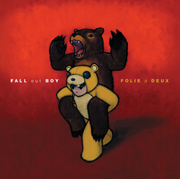 To be honest, I only started taking notice of Fall Out Boy after I read that rapper Lil Wayne would feature on the band’s new album. That and the fact that regular tabloid fixture and sometime bassist Pete Wentz seemed like an interesting character.

Despite my indifference, since 2005, the punk-inspired alternative rockers have built themselves an impressive fan base and their fifth album, “Folie a Deux,” goes some way to justifying the popularity and showing they could still pick up new fans, with Wentz’ sordid life providing colorful material for lyrics sung with Patrick Stump’s arena-perfect voice.

The pick-me-up tracks will quickly blow away the doom and gloom with choruses like “no one wants to hear you sing about tragedy.” Even breakups aren’t so painful after hearing the “we had a good run” philosophy. And yes, Lil Wayne does appear, along with handclaps, on “Tiffany Blews,” showing if anything, FOB could lose the celebs, do all the singing itself and still produce a winning album.
By Cam Graham