The best of both worlds?

The best of both worlds? 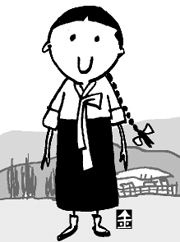 A famous Korean pop song goes, “Today, I wander aimlessly again.” The lyrics remind us of a Chinese saying: “Begging for food at a house in the east and sleeping at another house in the west.”

It must be difficult for wayfarers to get decent food or find a place to sleep. The expression makes being a wanderer seem like an empty experience. However, the original meaning of the Chinese saying was quite different. It did not refer to a ragged wayfarer who, free from all ties, finds what he needs wherever he is.

A woman lived in the state of Qi during ancient China’s Spring and Autumn Period. She came of age and her father wanted her to marry to lighten his burden. He came up with an idea: There were two young men in the neighborhood and he decided to marry his daughter off to one of them.

The problem was that the man at the house in the east was rich but hideous. The man in the west was handsome but his family was exceedingly poor.

After pondering the matter, the father decided to let his daughter make the decision. He invited both of the men to his house, let the daughter take a look and make up her mind. Before the father invited the two men to his house, he told his daughter to roll up her right sleeve if she liked the man in the east and the left sleeve if she liked the one in the west.

The story is in a book called “Yiwen Leiju,” a collection of stories and poems. The fable mocks a person who neglects principles and takes only what suits him.

A Korean adage says: “If I am seeing someone besides my partner, it’s called romance. If others do the same, it’s called an affair.”

The Korean Teachers and Education Workers’ Union and the Korean Confederation of Trade Unions exemplify this expression.

A high-ranking member of the labor group tried to rape a member of the teachers’ union, but the two organizations are trying to hide the case from the public.

The teachers’ organization fervently protested when a headmaster ordered a female teacher to make coffee. The umbrella union talks about human rights and democracy all the time.

They shout slogans but neglect their principles, which is worse than a woman who picks the best possible husband, even if it means marrying two men at once.

Before talking about grand ideologies, the two organizations must get their morals in place.