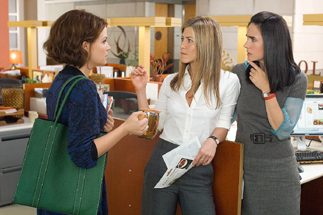 
The phrase “He’s just not that into you” brought “Sex and the City’s” Miranda a great deal of clarity in her relationships. Women everywhere made it their mantra, as if acknowledging that someone does not like you is empowering.

People spoke about this concept as if it were new, made their own observations, told their own stories. Then they realized it was a pretty empty one-liner and moved on.

And then Hollywood thought it would be a good idea to make a film about it.

Let’s start at the beginning - a very good place to start.

A grubby little boy shoves a little girl in the sandpit, whose mother tells her this just means he likes her. This scenario is set up as an allegory for the torture of love.

Just in case anyone should miss this sweet connection, a narrator kindly removes any subtlety by explaining it. This is a delightful trend throughout the film that ensures no viewer is left to make their own conclusions.

Incidentally, The Great Sandpit Incident is also the finest moment in the film. Once this sandpit-dwelling youngster learns that men who love her will always hurt her, we lurch forward into adult life where she and everyone she consorts with is jaded, cold and unappealing.

Enter Scarlett Johansson. She’s as buxom and bouncy as ever, and if you’re lucky this may well distract you from the fact that Johansson ends up playing the very same emotionally flat character she always does.

But she’s not all to blame for this synthetic travesty of a film. Jennifer Connelly, who was the most charismatic and glowing wife to Russell Crowe’s character in “A Beautiful Mind,” this time plays a rigid, relentlessly boring wife to Bradley Cooper.

And Cooper, whose face too strongly resembles a weasel for him to make any sort of sensitivity plausible, plods through the movie with so little commitment to his role you might wonder why he showed up at all.

Ah, yes. He gets to grope Scarlett a few times, massaging her only real acting assets.

The only watchable plot was between Gigi and Alex, played by Ginnifer Goodwin and Justin Long. It was predictable, it was cliche; but it was warm and familiar and cute.

The pair outshone some of the most bankable stars in the industry. They brought gentility and energy to a film that otherwise heaved with the weight of big stars making big efforts for Big Emotion.

The ultimate insult to feminine strength was the message that women are marriage-hungry, man-trapping beasts. Wait, so this film implied that all men are bastards and all women are emotionally demanding banshees? That’s not even insulting anymore, it’s just old.

He’s Just Not That Into You