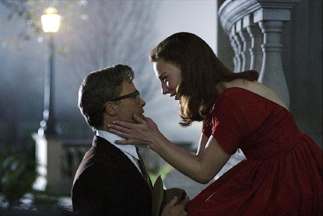 “The Curious Case of Benjamin Button” is a film of many permutations, both in plot and production. In the ’90s, screenwriter Robin Swicord penned her Baltimore-set version of the F. Scott Fitzgerald short story, a would-be Ron Howard project to star John Travolta.

Later, names like Spike Jonze and Gary Ross entered the picture as possible directors, while other writers morphed the screenplay along the way.

And thank God none of these previous versions came to fruition, as in its current, final state, Benjamin Button is exactly as it should be.

As the film’s Korean title explains quite literally, “Benjamin Button’s time goes backwards” - that is, he’s born in the body of a tiny octogenarian, grows into a strapping young man and dies an infant.

The strikingly ageless Brad Pitt lends his face to such a character, and really, there is no better choice. The same goes for the setting, as this topsy-turvy world roots itself in New Orleans, which, with its modern-day mythology, is a better fit than the gritty world of Baltimore.

And in the hands of David Fincher, he of “Se7en,” “Fight Club” and “Zodiac” fame, the whimsical story is appropriately rendered in masterful special effects. But in the land of voodoo and bayou boogeymen, Fincher doesn’t get carried away a la Tim Burton in “Big Fish” (and, well, everything else). There is magic in the air of this New Orleans, but the looming specter in the film isn’t some poltergeist, but Hurricane Katrina.

Weather patterns aside, the bulk of the story’s tension comes from Benjamin’s lifelong love interest, Daisy, who comes in the form of Elle Fanning, then Madisen Beaty and finally the stunning Cate Blanchett. She gracefully sashays through the film as a dancer, and kudos to her for performing almost all of her dance scenes - although there was a stand-in for a couple of shots.

Of all the deserving Oscar nods this film received, it’s too bad Blanchett was passed over, even if she does already have a golden statuette on her mantle. Brad Pitt may be the face of Benjamin Button, but Blanchett is the heart of the film. Her Daisy is the character who does all the feeling and reacting, whereas Pitt plays Benjamin with the same reserved calm seen in “Meet Joe Black.”

The two forge a deep, emotional, but not necessarily romantic, connection upon their first encounter, when Daisy is a little girl visiting her grandmother in the nursing home where Benjamin lives. As Daisy grows older and Benjamin younger, they reconnect again and again, only at inopportune times. Like all too many real-life couples, when she’s raring to go, he turns her down. When he comes a-courtin’, she’s found someone else. And so it goes until finally - blessedly - their lives converge at exactly the right time.

Fincher pairs such a dreamy, fantastical tale with just the slightest gloss of figurative Vaseline over his lens, with rich cinematography of a moonlit gazebo and dialogue uttered with the sweet lilt of a Southern drawl. The affair is escapist, but it manages to cast a powerful spell on viewers - one that seems to make 166 minutes feel like a mere daydream.

The Curious Case of