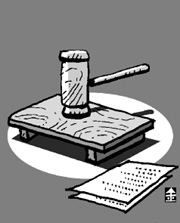 “A libel case filed by William Westmoreland, former commander of U.S. forces in Vietnam, against the broadcast network CBS is pending in court. Every time the trial opens, a 49-year-old male with a reddish face turns up. He hands out reading materials to journalists after the trial. He is neither a journalist nor a lawyer. He works for CBS, but is not a staff member.”

This article, published in the New York Times in October 1984, heralded the emergence of a new field in the public relations industry. The man with the reddish face was John Scanlon, then a representative of a public relations agency.

Regarded as the “godfather of lawsuit PR,” he protected CBS’s image, and has engaged in a variety of trials for two decades since.

Lawsuit PR does not always refer to an effort to make a ruling lean in favor of one party. It includes various public relations activities aimed at steering public opinion.

The predominance of lawsuit PR in America is rooted in the increase in litigation against companies beginning in the 1980s. People began to recognize that protecting the corporate image is just as important as winning in court. These days, PR specialists get involved in the early phase of investigations, even before the trial opens.

In his book “In the Court of Public Opinion,” public relations expert James Haggerty said, “It is a wholly different area from the existing PR areas concentrating on events,” in that complex legal problems should be described in a brief and to-the-point manner. A long-term perspective and sensitive control of strength and weakness are an integral part of the work.

For example, one McDonald’s libel case in Britain was a major failure. McDonald’s sued two unknown environmentalists in 1994, alleging they were handing out flyers that said the fast-food chain was selling hazardous food. The trial mobilized teams of lawyers and lasted three years.

However, public opinion had turned vehemently against the restaurant. In the eyes of the public, a giant conglomerate had reached down and crushed some socially weak individuals.

Public opinion is becoming more important in investigations and trials in Korea. As new developments are broadcast in real time via the Internet, fierce debate is often sparked among netizens. It is as if there were a trial by jury every day, with the public as the jury.

Controversies both before and after the release of the official investigation results continue to persist. The “Minerva” blogger case and the Yongsan tragedy are prime examples. The prosecution needs to do its best to conduct thorough and constructive investigations. It’s high time to explore ways of gaining public trust in this regard.