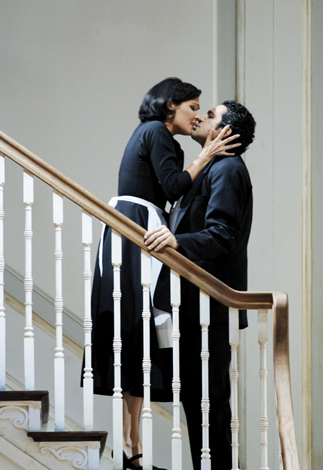 “The Marriage of Figaro” will be presented at the Seoul Arts Center next month. [JoongAng Ilbo]

Seoul Arts Center has chosen “The Marriage of Figaro” as the first opera to be presented at its newly renovated opera house. The venue was destroyed by fire in December 2007 and has been under reconstruction ever since.
The center will present David McVicar’s rendition of the opera that premiered at London’s Royal Opera House in 2006.
“With its political satire and humor, The Marriage of Figaro has all the elements necessary to make it possibly the most versatile opera,” said opera critic Lee Yong-suk. For this reason, opera directors have “cooked up” different versions of the opera, giving the characters new identities and the setting drastic makeovers.
Last December, the Korea National Opera took The Marriage of Figaro into a baseball field. In the hands of Lee So-young, the director of the troupe, Mozart’s opera has been reworked with the count as team manager and Susannah the maid as a cheerleader.
Her decision to transform the stage into a baseball ground and dress the singers in baseball kit caused a sensation among opera fans. Her intention was driven by an interest in drawing parallels between the rules of marriage and those of baseball, Lee the director said.
The fate of many operas now lies in the hands of directors who interpret the performance in different ways, giving way to a “directors’ era,” which began a few years ago and is now at its peak.
For example, U.S. theater director Peter Sellars took a radical departure for his Marriage of Figaro by using a highly contemporary setting. Trump Tower went up on stage, the count was a millionaire chairman and Figaro, his driver.
And Susanna was the driver’s girlfriend.
Sellars said he wanted to convey how the upper class hasn’t changed over the centuries.
In the case of McVicar’s version, the director separated the stage into two halves.
The servants live on one side of the stage where it’s dark and filthy, while the other side is neat and clean.
The count’s and the servant’s family sing in perfect harmony, but they cannot harmonize living in two different worlds, the right and left.