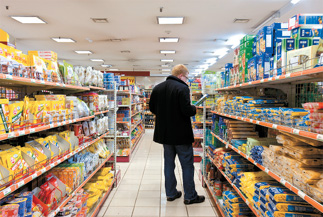 Shelves at Hannam Super are stacked with foreign spices and sauces.

Since it opened in 1968, Hannam Super has been selling the same sort of products: exotic sauces and spices, of which there are more than 2,000.

The market isn’t that big, but large enough for two shopping carts to pass each other down the aisles. And the fun thing about shopping here is to navigate those aisles and check out foreign foodstuffs that you’ve never seen before, or that you don’t see elsewhere.

Tom yum goong, the sweet and sour soup served at local Thai restaurants, comes in canned containers here, and you can get 30 kinds of beer plus turkey and lamb shanks. Then there are the Western veggies and spices, like rucola (also known as rocket), thyme and basil, which are grown on Korean farms. Shingeum Farm in Gwacheon, Gyeonggi, supplies Western plants to airlines and hotels, and Hannam Super is the only market that receives vegetables from there.

Because most of the products are from overseas, expatriates make up the bulk of the patrons and inevitably the mart serves as a hub for the exchange of information. On one wall of the market are notices from families seeking housekeepers or selling cars, for instance.

Jang Jae-cheol, head of the market, said he also provides a service to expats living outside Seoul. If they fax in a list of products they want to purchase, Jang readily packages then and delivers door-to-door.

But Jang does have his fair share of concerns. “Large discount stores have their own import corners now,” he said. “And the exchange rate obviously isn’t helping us. So it’s time to revisit our business plans and look for new ideas.”