What happens when idealism goes unfulfilled

What happens when idealism goes unfulfilled 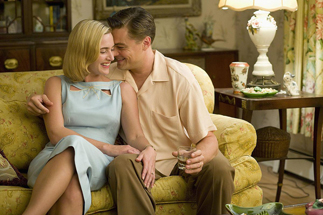 Americans, myself included, are a strange breed. We grow up imbued with a sense of invincibility and entitlement that stems from our 232 year-old history as revolutionaries. Our forefathers fought for our independence, thus giving us unbridled pursuit of life, liberty and happiness - and our lives had better be the best in the world, dammit!

This is the lesson drilled into American brains from kindergarten, and this overweening arrogance has found its way into many a piece of cinematic art, from the superb “Team America: World Police” to a new release this week, “Revolutionary Road.”

The aptly titled Revolutionary Road, based on the Richard Yates novel, sets its sights on a pair of married malcontents, April and Frank Wheeler.

Set in the 1950s, when American society was at the peak of its conformity with all its Levittown homes and white picket fences, the film tracks April (Kate Winslet) and Frank (Leonardo DiCaprio) in their quest for that elusive “more.” In the opening scene, we see Frank and April meet in all their young, idealistic glory - she dreaming of being an actress, and he without answers but full of promise.

Seven years later, they find themselves in the kind of in-car fight that warrants pulling over, and nearly come to blows. This is the first of several bitter spats between the two, with caustic dialogue that I haven’t seen the likes of since “Closer.”

We see why Frank and April are so angry; they’re devastatingly unhappy with their mediocre lives. This is nowhere less apparent than in the suburbanite pair’s joyless, perfunctory sex, both within their marriage and with others.

To the audience, it’s depressing to the core, as even their beautiful bodies can’t save their trapped souls. Turns out Americans, or these ones at least, aren’t so remarkable after all.

The Wheelers, to their credit, do make an effort to escape: April, the more ambitious of the two, decides to move the family to Paris. Frank’s initially on board, too, but then begins to back away from the idea as real life seems to get in the way of their plans.

Kate and Leo bring a tremendous amount of understanding to their roles. Although it took my mind a few frames to get used to the sight of my beloved former Jack and Rose howling at each other, I couldn’t help but deeply empathize. Despite all the horrible things they say to each other, you can’t hate them.

As an aside, Kathy Bates does a wonderful job as the Wheelers’ real estate agent and neighbor. Her character introduces her mentally ill son, John (Michael Shannon), to the “nice, young” Wheelers in hopes that they’ll be kind company for him.

Shannon is fabulously terrifying in the role, the only other person in the film other than April who can seem to incite the same anger from Frank. John’s freedom from the restraints of social conformity allow him to tell April and Frank like it is - here, the crazy guy is the sanest one of all.

Revolutionary Road is a painfully sad movie, so much so that it strikes viewers to the core.

But don’t expect waterworks; this is a film of quiet, subdued sorrow, the kind that sets in as slowly as a bloodstain spreads.