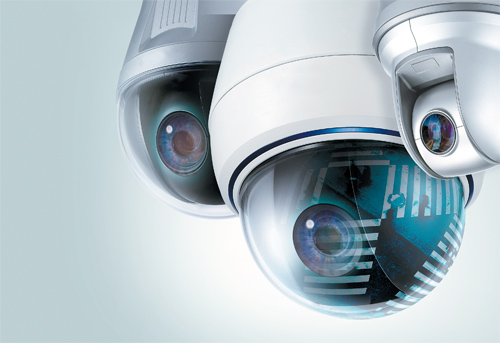 Surveillance cameras and security monitoring systems provide us with convenience and safety, but there’s a cost - a loss of privacy.

From the moment you step out of your apartment and get into the elevator, you’re followed.

A mass of surveillance cameras, mobile phones, credit cards, T-money transportation cards, e-mail and messenger programs leave behind an electronic trail, whether you like it or not.

We see cameras everywhere, but who monitors them? Is the loss of privacy worth it? And what exactly are the benefits?

JoongAng Sunday visited some 24-hour security centers to take a look at what goes on behind the scenes.

Eight employees wearing headsets at the Fraud Detection System team at Kookmin Bank building in Gwanghwamun, central Seoul, monitor a set of computer monitors. Suddenly, one of the workers, Oh Sae-jung, clicks on a number and speaks to one of the bank’s clients. 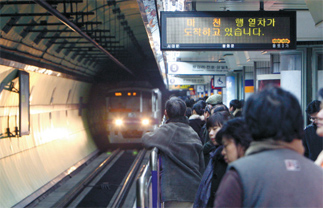 The16 members of the team work 24 hours a day in shifts to watch over the transactions of over 7.5 million clients.

“Kookmin Bank has all the details of its clients dating back to 1984,” explained Cho Jung-hui, the manager of FDS. “We protect our clients from fraud with a system that analyzes our clients’ purchasing patterns. This system alerts us whenever something seems amiss and we contact our clients right away.”

It’s quite a task.

“An average of 2.3 million transactions take place in a day and we usually notice about one or two fraudulent cases,” Cho went on.

While this type of service can provide KB clients with security and convenience, such close monitoring is not something everyone welcomes. 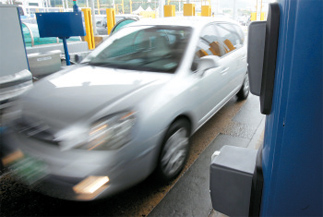 A vehicle passes through a tollgate at the Gyeongbu Expressway via the High Pass lane.

Irked by what he felt was an invasion of his privacy, Kim, 43, a resident of Sungnae-dong, southeastern Seoul, who only wanted his surname used in this article, recently filed a civil petition with the Financial Supervisory Service.

“I was enjoying a weekend getaway with my family when I received a call from an insurance company asking if I’d be interested in a special weekend package. The employee seemed to know quite a bit of personal information from my credit card. I felt very uncomfortable,” Kim said.

Another example is the tollgate leading to the Gyeongbu Expressway in Gungnae-dong, Gyeonggi, where vehicles quickly drive by the “High Pass” lane, a system set up in 2000 to help reduce congestion.

Once a driver uses the special lane, his or her identity, the location of the tollgate, the time the vehicle passed through the gate and the amount transferred to the Korea Expressway Corporation computer server is recorded on a database for five years.

So even if you can’t remember where you were on a particular day five years ago, the KEC can find out.

Is this an invasion of privacy? It’s a matter of opinion, but the police think the benefits outweigh the losses.

Criminals have the most to lose by living in an overly surveilled state since well-hidden cameras easily pick up information that the police can use to make arrests.

The cameras at tollgates, for instance, capture images of license plates, which are stored for 10 days, or longer if the police make the necessary request, explained Kim Yong-il of the KEC.

“Detectives frequently contact us with requests for data to be used in their investigations,” Kim added.

At a CCTV Security Center in Yeoksam-dong operated by the Gangnam District Office in southern Seoul, a large monitor is divided into hundreds of small squares that display images from 412 surveillance cameras. Starting next month, the district office has plans to install 110 more cameras to bring the total up to 522.

In the 12.6 billion won ($8.3 million) center eight policemen from Seoul Suseok Police Station in Gangnam monitor a geographic information system 24/7. If a crime is radioed in, the screens enlarge the map to track fleeing criminals.

“The cameras can rotate 360 degrees, produce high-definition images and zoom in on objects 100 meters [328 feet] away,” said Choi Min-hang, manager of the Gangnam District Public Administration department. The images are stored for 30 days to assist police investigations.

“We use the images to cross-reference with a criminal records database,” said a spokesman from the National Police Agency who wished to remain anonymous.

However, it should be noted that although images from surveillance cameras provide clues, they aren’t that useful. According to the police spokesman, the images are used in less than 5 percent of total arrests.

In addition to the 412 surveillance cameras, the Gangnam District Office also operates 147 cameras to keep tabs on illegal parking.

A large monitor at the CCTV Security Center in Yeoksam-dong, southern Seoul.

“It’s difficult to come up with the exact number but at a rough estimate, over 2 million surveillance cameras are installed throughout the country,” said Lee Jae-ho of the Gangnam District Office.

Mobile phones are now an essential communications tool, but they can be used not just to talk with but also to track others.

Lee, an office worker who only wishes his family name to be used, was at work recently when he got a text message from a center for senior citizens.

He clicked the “O.K.” button on his phone and a small map appeared on the screen with a red dot indicating the whereabouts of his 80-year-old mother. He gets similar updates every hour.

“I subscribed to a location-tracking service out of concern for my elderly mother. I feel a lot happier knowing where she is,” he said.

The detailed information of those subscribed to the tracking service is kept in the corresponding telecommunications company for six months.

“The current tracking service is based on the BTS, or base transceiver station, and therefore it’s not that accurate, but the new line of mobile phones to be released later this year will all contain GPS [global positioning systems] and will provide a lot more accurate information,” said one telecommunications employee, who didn’t wish to be named.

Offices are no different. There are surveillance cameras installed in almost every nook and cranny, and any company can monitor e-mail and messenger communication if it has the right software.

Monitoring who wrote what to whom and who printed what is very easy.

But what’s the downside to surveillance? Admittedly, there are benefits, especially if criminals get caught and crimes are averted, but what if we don’t want other people to know about us? What choices do we have about protecting ourselves?

“Surveillance cameras, T-money, bank transaction information, mobile phone records all leave a ‘digital footprint’ or ‘digital shadow.’ While the information can be used for police purposes, it can also be leaked, which could put a lot of people at risk,” said Professor Lee Young-suk of the Digital Culture Research Center.

Right or wrong, Big Brother is most certainly watching.