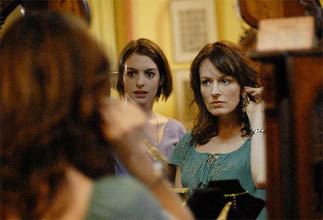 For much of her career, Anne Hathaway has been a rather unprepossessing actress.

Sure, she was adorable on her debut in “The Princess Diaries,” but for years she remained mired in such fairy-tale snooze-fests as “Ella Enchanted” and “Becoming Jane.”

But she’s been transformed by her first serious leading role as Kym, a recovering drug addict fresh out of rehab, in “Rachel Getting Married.”

The part earned Hathaway a best actress nomination at this year’s Oscars, and although she didn’t walk away with the golden statuette, her performance is an exceptionally executed exercise in expanding her breadth.

Throughout the film, it’s hard to believe the woman on the screen is indeed Hathaway; she’s a simmering threat in nearly every scene, constantly on the verge of boiling over and causing a commotion.

Her arrival home comes at a high-stakes moment, as her family busily prepares for the titular event of the film, her sister Rachel’s impending nuptials. With Kym’s unapologetic “yes, I’m a junkie” attitude, Hathaway takes screenwriter Jenny Lumet’s lines and runs - no, sprints - with them, oozing sarcastic wit with such gems as “Seriously, you’re so tiny it’s like you’re Asian.”

The audience becomes voyeurs into this extremely tense moment in a family’s life, tracking Kym from a distance at knee-height and then coming in tight on her face for more meaningful conversations.

Rosemarie DeWitt is well cast as Rachel; she and Hathaway are able to play off each other visually and verbally, utterly convincing in their concurrent sisterly bond and hatred.

Upon reuniting, they’re the sisters many a woman would wish to have with their giggly recounting of a friend’s figure skating fantasy from their teenage days.

But the pair really crackles when it comes to sibling rage. After Kym’s self-centered, shallow toast at the rehearsal dinner, she and Rachel launch into a screaming match at home unsuccessfully mediated by their father (Bill Irwin).

What succeeds in ending the fight is Rachel’s spur-of-the-moment announcement that she’s pregnant, a topic completely irrelevant to the subject of their argument and one that trumps anything Kym has to say.

Of course, dropping a bomb like that draws a chorus of thrilled congratulations from everyone else in the room.

But Kym’s response, in true, petty fashion, comes in the form of a hollered “That is so unfair!”

Despite its title and female leads, Rachel Getting Married is not some saccharine chick flick about roses and romance.

In this movie, Hathaway’s huge doe eyes don’t fill with sparkly stars; instead Kym’s flat gaze reflects torture, and the audience can’t help but feel pity for her.

The wedding, while beautifully shot, is not the focus here. Rather, Demme takes an exacting, yet moving, look at a dysfunctional family and how it copes with its imperfections.