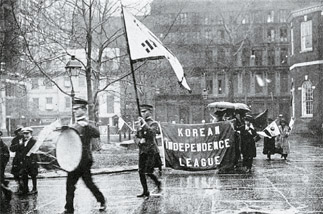 The Korean Independence League, seen here demonstrating in Philadelphia, U.S., in 1919, helped raise awareness about Korea’s struggle for independence. Provided by the Independence Hall of Korea

The March First Movement in Korea was aided by an international network of supporters.

Expatriate Koreans in Shanghai, Manchuria, Tokyo, Hawaii and the United States risked their lives raising funds and supporting other covert activities aimed at bringing independence to their home country.

According to Erez Manela, a history professor at Harvard University, this is because of “unusually repressive policies of the Japanese colonial authorities as well as by the prominent role of Korean Christians, more likely to live abroad.”

One of the major expatriate liberation groups was the Korean National Association, formed in Hawaii in 1909. In 1911, the association expanded, opening a base in San Francisco and branches in Hawaii, Siberia and Manchuria.

In the wake of the March First Movement, the KNA launched the Korean Independence League in Philadelphia in April 1919, declaring Korea’s resolution to attain independence from Japan.

Also interesting is the women’s associations in the United States and their part in the global network of the independence movement. According to Park Yeong-ok, the president of the March First Women’s Association, several women’s associations formed before March 1, 1919 to help build an alliance of Korean women living abroad. The major ones were based in San Francisco, Sacramento and Dinuba, all in California.

“They were determined to get involved after they heard a news report that Japanese soldiers cut off the hand of a Korean girl taking part in the March 1st protests because she was holding a poster,” Park said.

The report came courtesy of The New York Times, which published an article on March 19, 1919, saying that during the demonstrations in Korea, “children [were] beaten, old men ejected from their houses, and women struck with swords.”

In response, the women’s groups set up collecting funds that they then sent to the Korean National Association, Park says.

In Tokyo, Korean expatriates moved a step faster. Relatively freer from censorship, some students issued 1,000 copies of the Proclamation of Independence, and about 400 students assembled at the Joseon Christian Youth Hall on Feb. 8, 1919, hailing “Long Live Independent Korea!”

Dozens were arrested, but the incident led to another protest on Feb. 12 and March 1 in 1920 in Japan.