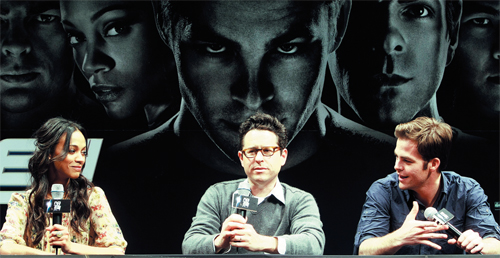 From left to right: Zoe Saldana, who stars as Uhura, director J.J. Abrams and Chris Pine, who plays Captain Kirk, in the 11th installment of the Star Trek franchise, “Star Trek: The Beginning.” [YONHAP]


The wait is over, as Nero, the villain from “Star Trek: The Beginning,” puts it.

Well, nearly over, since the much anticipated science fiction film doesn’t actually open here until May 7.

But that didn’t stop members of the crew and cast beaming into town last week to promote the 11th in the series of Star Trek features.

Star Trek, which started life in 1966 as a television series created by the American screenwriter and producer Gene Roddenberry, boasts a huge fan base and an elevated position in popular culture all over the world.

But even if you are new to the story and the characters, don’t worry. Even the film’s director J.J. Abrams (“Lost,” “Alias,” “Mission Impossible III”) wasn’t a “Trekkie” before he signed on for this project.

“As someone who is not a fan of Star Trek, this movie was not made for fans of Star Trek,” he said, at the CGV Multiplex in Apgujeong, southern Seoul, last Wednesday.

“It was made for people who enjoy movies and having a thrilling emotional and pulse-pounding experience.”

The director was present along with Chris Pine as Captain Kirk and Zoe Saldana as Uhura, one of Kirk’s crew in the earlier films.

Though the film is a reinterpretation of previous films and series, “the studio wanted to give the film a fresh start,” according to the director.

In fact, Abrams had been brought in initially as a producer, but upon reading the script, he saw the potential that the original stories had failed to realize due to technological constraints.

“So I got very greedy and I decided to direct [the movie] myself,” he said, in a conference room packed with reporters.

Compared to previous films, the characters in the upcoming prequel are more dynamic.

“There’s big adventure, journey, romance and spectacular action that revolve around spacemen,” according to the director.

Kirk, the youngest captain in Starfleet, has the biggest fan base. In the original series, he was played by William Shatner, now 78, and in the upcoming film, Pine takes over the role, which he said was a great challenge since he was playing a character with whom Shatner is inexorably entwined.

Plus, Pine said he had little time to prepare for the role, and has only seen the first two of the Star Trek television series.

Fortunately, this meant Pine was never in danger of imitating Shatner. Instead, he’s had free rein to interpret the role anyway he sees fit.

“Abrams’ prescription for realizing the role - and this goes for all of us - was to create our own and not worry too much about obeying the laws of the original Star Trek world,” the actor said.

“I was just simply taking over the mantle of the character and was doing my part to expand on the original,” he added.

Meanwhile, Saldana’s Uhura, the chief communications officer and the only female crew member aboard, said that she was destined for her role.

“I have a gravitational pull toward characters who are strong [like Uhura],” she said.

When asked what she likes best about her role, she answered: “The way she [Uhura] is able to command herself with so much discipline and strength in a setting that’s mainly masculine and still hold court and fulfill her job in an androgynous manner.”

With fans’ hopes mounting, the director said, “I can never predict what an audience wants and will want, but the best test is if I want to see it.”