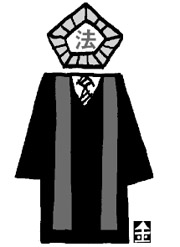 A person who has obtained a legal practitioner’s certificate receives a wig as a congratulatory gift in Britain. Both judges and barristers are required to wear wigs as part of the formal courtroom attire. The wigs are usually made from hair from a horse’s mane and tail, and the price can exceed 1,500 pounds ($2,081). People seldom replace their wigs, because the more it has faded, the more judicial experience one has.

The primary purpose of the wigs, which appeared for the first time in British courts in the 17th century, was to hide individual differences during court trials. If individual characteristics become recognizable, it might give the false impression that different rulings might be given based on one’s personality. Despite people’s dissatisfaction with the inconvenience and unsanitary features of wigs, however, the tradition has stayed strong for over 300 years as far as criminal trials are concerned.

Judicial robes also reflect the people’s viewpoints and the mood of the times. After the United States won independence from the British Crown, judges continued to wear wigs until the fourth Chief Justice of the Supreme Court, John Marshall, abolished the tradition and simplified judicial robes into a gown-like garment. Here, we can see the spirit of pragmatic innovation in the New World.

Western judicial robes were first imported into Korea during Japan’s colonial rule (1910?1945). Judges were forced to carry a sword until the March First Movement in 1919.

However, the symbolic pattern of the Japanese Paulownia flower was embroidered on the chest of judicial robes, signifying that a judge was appointed by Japan’s Emperor.

In 1953, Chief Justice Kim Byung-ro introduced a new judicial robe with a pattern of the Rose of Sharon. The current judicial robe, adopted in 1998, emphasizes integrity.

Although judicial robes have undergone numerous changes over the past half century, the color is still black. Why? Black is associated with fairness and neutrality. The same may be said of the black garments worn by Catholic priests and football referees. It should mean that a judge’s actions should be no different from that of priests. How fearful and lonely they must be, as they judge the world based on laws and conscience.

We are now seeing a thorough investigation into whether e-mails sent by Supreme Court Justice Shin Young-cheol to judges under his supervision at the Seoul Central District Court constituted intervention in court trials or fair use of his judicial and administrative authority.

We hope that this controversy will not hurt peoples’ trust in the law. Judicial robes have seen years of honor and disgrace within the judiciary.

However, those robes are nothing but thin cloth. It is only the judges who can attach importance to the garment.